The Brewers 25-man roster to open the season is set now with these last few moves from this morning.

With the final days of spring training here, the Brewers made a few more transactions today as they prepare to set their Opening Day roster.  They first optioned Rob Wooten to Triple-A Nashville, giving the last spot in the bullpen to Zach Duke.  Wooten had put together a good spring, posting a 3.86 ERA in 11.2 innings with 13 strikeouts to 1 walk.  While he may have performed better than Zach Duke (who posted a 4.00 ERA in 9 IP with 10 strikeouts and 3 walks), Wooten's option may have been the deciding factor since it allows the Brewers to maintain pitching depth.

The Brewers also made another move this morning, sending Elian Herrera to Triple-A Nashville as well.  With this move, the last bench spot will go to Jeff Bianchi.  Bianchi had a great spring, hitting .386/.413/.500 in 46 PA, and may have hit his way into that last bench spot.  It also helped Bianchi that Herrera had an option available, allowing the Brewers to keep depth available in the minors.

With these moves from this morning, the 25-man roster is set.  Barring any last minute changes, here will be the depth chart to start the season (projection taken from Brewers.com): 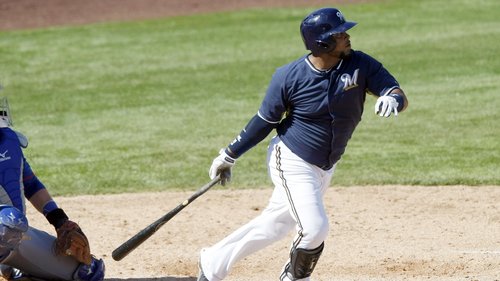 Catch up on all of the Brewers news from the off day with the Frosty Mug.