Today is the Brewers' eighth game of the spring and their third matchup with Oakland, but the first time the two teams have met in Maryvale.

At 2:05 Central time this afternoon they'll send Yovani Gallardo (0.00 ERA this spring, 4.18/3.89 ERA/FIP in 2013) to the mound for his second start of the spring. Gallardo kept the Giants off the board in his debut on Friday, holding them to a single hit over two innings with no walks and one strikeout. Today he's likely to throw three innings in his home debut.

It's too early to start looking at the numbers for starting pitchers (actually, there may never be a good time for that), but Gallardo, Kyle Lohse and Wily Peralta have combined to pitch nine scoreless innings this spring. The other two likely members of the Opening Day rotation, Marco Estrada and Matt Garza, have a combined 10.50 ERA over three starts.

Gallardo faced the A's once during the regular season in 2013 and it didn't go well, as he allowed five runs on six hits over six innings. Two current A's have faced him ten times or more:

He'll face 25-year-old righty Jarrod Parker (40.50 ERA this spring, 3.97/4.40 ERA/FIP in 2013) as he looks to bounce back from a rough spring debut. Parker faced the other half of the Giants' split squad on Friday and allowed six runs on five hits and a walk over just 1.1 innings, and also hit a batter.

Parker joined the A's in a December trade in 2011 and has made 61 starts for the team since, plus three postseason starts in the last two seasons. His fastball velocity dropped notably in 2013, though, losing almost a full tick on the radar gun. It still sits in the low 90's and he pairs it with a changeup and slider.

Parker has never faced the Brewers during the regular season. 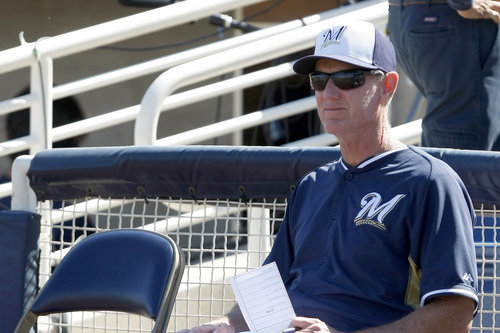 We're talking about walkoff losses and more in today's roundup of all things Brewers.

Today's Brewers lineup is as follows:

The weather in Maryvale should be absolutely perfect for today's game. Expect a game-time temperature around 76 to climb up near 80 as the afternoon goes along, with no chance for rain and light winds.