Game two of the Brewers season will feature a few small changes from Game one.

One day after the Brewers managed to shut out the Braves, Kyle Lohse will look to replicate the feat as he starts his first game of the 2014 season. He was about as good as the Brewers could have asked for in his first season with the Brewers in 2013, with a 3.35 ERA, minimal walks, and nearly 200 innings pitched. He'll look to replicate his success of both 2013 and the two years before that as his career renaissance continues.

What can the Brewers expect from Kyle Lohse this year? 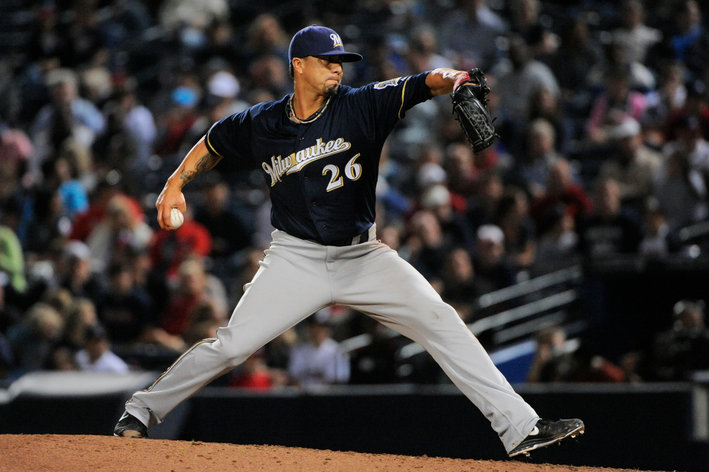 Derek takes a longer look at Kyle Lohse, and what the Brewers and Brewers fans can expect to see from him moving forward.

The Brewers will start Rickie Weeks and Mark Reynolds for the first time this season as they take on left hander Alex Wood. They will replace Scooter Gennett and Lyle Overbay, respectively.

Wood, 23, was a 2012 2nd round selection who absolutely blazed through the minors and wound up pitching in 31 major league games last year. Eleven of those were starts, but the Braves had originally planned on him being a reliever this year before Tommy John took out Kris Medlen and Brandon Beachy while Mike Minor is out for a short period with injuries of his own.

Not that Wood doesn't deserve a starting spot on his own merit, of course. He more than held his own last year with a 3.13 ERA with nearly a strikeout per inning. He dominated competition during spring as well, allowing just one earned run over 20 innings with a 16:2 K:BB ratio.

The Brewers will be Wood's first test as he begins his first full season. Hopefully they rough him up a bit.