Ryan Braun and the quest for 3000 hits

Ryan Braun is making a name for himself over his career as one of the best Brewers of all-time. Can he match Robin Yount's career hits total?

Share All sharing options for: Ryan Braun and the quest for 3000 hits

After the conclusion of the 2014 season, there will be no more active hitters with 3000 hits. Derek Jeter, who currently sits at 3,326 hits and was the last to reach 3,000, announced before the season began that this would be his last. After him, there is a whole lot of uncertainty as to whether any current player will reach 3,000 anytime soon.

Alex Rodriguez is the next closest. If he plays again, he'll reach it. He needs just 61 more hits, a relatively simple task. However, with his recent escapades this offseason, he might never get another major league plate appearance. He's still under contract with the Yankees, but they might prefer to eat his absurdly large deal and move forward without the distraction. And if they just cut him, who's to say he'll get picked up by another team?

There are three players above 2,000 hits who might have a chance. One, Miguel Cabrera, just broke the 2,000 threshold this season and sits at 2,004. He is also a two-time reigning AL MVP, has hit above .320 each of the last five years and, most importantly, is only 30 years old. But even he isn't a sure bet to hit 3,000. For another 1,000 hits, he needs 5.5 more seasons of averaging 180 hits. He has done that his entire career to-date, but is a big body who will eventually slow down. I'd place money on Cabrera making it, but I wouldn't wager everything. 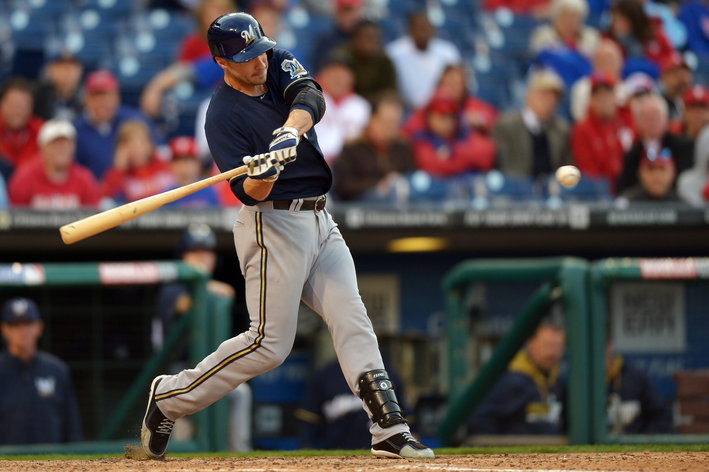 Ryan Braun likely won't be reaching 3,000 hits. Does he have a chance to hit another highly-regarded number?

So what about Ryan Braun? He does not have the most career hits among active Brewers (Aramis Ramirez holds that distinction), but he does have the best chance of reaching the vaunted 3,000. A few former Brewers have reached that number: Paul Molitor, Robin Yount and Hank Aaron. Yount is the only one to have 3,000 hits while in a Brewers uniform. Bernie Mac came close, but fell one shy. Until someone new comes along, Braun is the last hope for a Brewer to reach 3,000.

Still, Ryan Braun notching 3,000 hits is unlikely. Currently, he sits at 1,169 hits over eight seasons. Say he doesn't get hurt, and stays at the same pace for another eight years (including 2014). He'll be heading into his age-38 season at around 2,500 hits. That's if he never slows down to age and if he never misses significant time with any sort of injury.

After eight more seasons, Ryan Braun will also be eligible for free agency following the 2021 campaign. That's if his mutual option was picked up. At that age, will he keep playing? Obviously that depends on his performance in those latter seasons. If he's hitting well enough that he decides to keep on playing, will the Brewers keep him? Who knows!

Thus, the only way to ensure Braun reaches 3,000 hits in a Brewers uniform would be for him to reach it before he becomes a free agent. To get an extra 500 hits over the next eight years, he will have to average over 60 more per season than he already has. Which means he'll have to pick up, oh, about 240 hits a year or so.

Ryan Braun isn't turning into an in-his-prime Ichiro Suzuki anytime soon. There's no way he hits 3,000 in the next eight years.

The overwhelming odds are that Braun doesn't reach 3,000 at all. He has a shot, sure, but he would likely have to play into his mid-40s to do so. That's not an easy thing to do for any player. And as for reaching Robin Yount, who had 3,142 career hits? No chance.

Braun may be passing Yount in career home-runs to take the franchise lead soon, but Yount can feel safe in the assumption that his franchise hits record won't be broken anytime in the near future.