Elian Herrera called up: A quick look at the newest Brewer

What will the newest addition to the Brewers' roster bring to the table?

Share All sharing options for: Elian Herrera called up: A quick look at the newest Brewer

Elian Herrera should fit in perfectly with the Brewers' bench. What I'm trying to say is he isn't expected to do a whole lot at the plate, but brings a nice glove.

That seems to be what the Brewers are looking for with regards to bench players. Nobody expects someone who isn't starting to post, like, a 900 OPS or anything but, yeah, Milwaukee's reserves are kind of specially inept when hitting. Jean Segura, batting .241 on the season, has just as many hits in 58 plate appearances as the Brewers bench has in a combined 94 plate appearances. Logan Schafer's 620 OPS is far and away the best among the five least-used batters on the team. 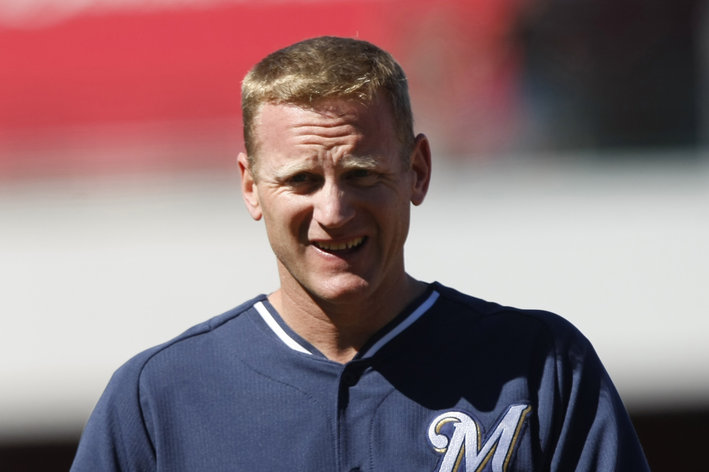 Lyle Overbay will take a few days off to celebrate the birth of his fifth child.

What the bench does excel at, however, is defense. Schafer is a clear upgrade over Ryan Braun and Khris Davis, Lyle Overbay an upgrade over Mark Reynolds, Jeff Bianchi is on par with Jean Segura and Aramis Ramirez, Martin Maldonado has received plenty of acclaim, and Rickie Weeks is still on the team.

Herrera is pretty much a known quantity at this point. He's 29 years old and, until this year, had spent his entire career in the Dodgers' franchise. Like the rest of the bench, he's a swell defender. Unlike most of the bench, he can play a whole boatload of positions. Literally any position except catcher. He's played 'em all. He's even pitched an inning (allowing two runs, in 2010). In the majors, he hasn't caught, pitched, or play first base. But he can pretty much do it all, in the field.

The question is whether he can do well enough at the plate to make him a valuable player to have on the bench. He's not the worst hitter in the world, sure. In fact, he's not been terrible at getting on base with a .364 OBP in 677 career minor league games and .336 OBP in 71 major league games.

However, it's probably not wise to expect much from him. Despite being a very good defender at multiple positions, he has barely received any time in the majors for a reason. Hell, he has not been good enough to maintain a full-time starter role in the minors having played in over 100 games in just five of nine seasons. A switch hitter, Herrera hits much better as a left-handed batter.

After impressing some with the Dodgers two years ago, he may have been close to earning a roster spot out of spring this year, but a great exhibition showing from Jeff Bianchi coupled with the fact Herrera still had an option remaining doomed his chances.

Herrera probably won't even see an at-bat or a defensive inning during this call-up. Lyle Overbay gets three days off only, then it's likely back to the minors for Herrera. However, the fact that he has been called up now indicates that he could be the first option to be back on the roster should anyone suffer an injury significant enough to land them on the disabled list.

If Herrera does manage to see consistent time in the majors this season, he certainly won't be bringing much new to the table. He'll be able to fill a few more positions, but he'll be the same all-defense, no-bat type player as the rest of the backups. It's no surprise that Lyle Overbay's walk Wednesday was the first time a Brewers' pinch-hitter has reached base all season.

Oh well, the Brewers have to go with what they've got and so far it's been working just fine. Here's hoping Herrera enjoys his time hanging out on the bench the next three days!