Elian Herrera will stay on the roster and likely see his playing time increase as Schafer sits for two weeks.

The Brewers made a roster move Sunday, placing Logan Schafer on the disabled list retroactive to April 18 and activating Lyle Overbay fro the paternity list, reports Todd Rosiak of the Journal Sentinel.

Schafer apparently strained his hamstring while in the on-deck circle during Thursday's game. He said he felt a small pop and would be forced to bunt in the Brewers' loss to the Pirates in a pinch-hit situation. So the curse of the hamstring returns. The Brewers had several players miss time with similar injuries in 2013, including Rickie Weeks, Yovani Gallardo, Jean Segura, Marco Estrada and Jim Henderson.

A quick look at the newest Brewer, Elian Herrera 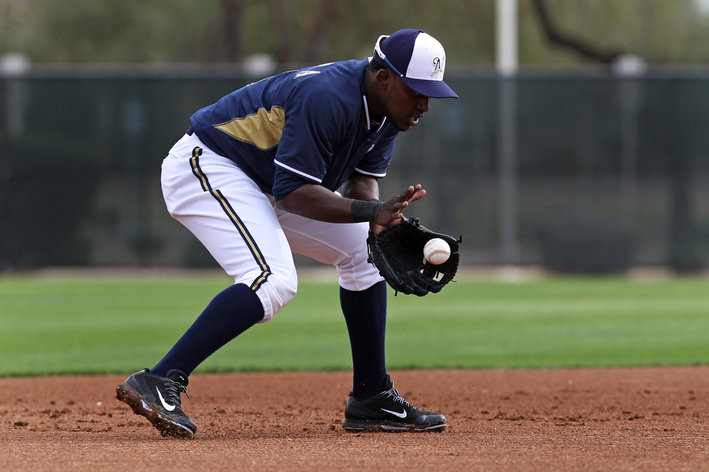 Taking a look at Elian Herrera, who will likely see his playing time increase with Logan Schafer out

It doesn't sound like Schafer will miss more than the minimum 15 days. That would put him on pace to return May 2.

In the meantime, the Brewers are now left with Elian Herrera as the only back-up outfielder while Khris Davis continues to battle through a tough slump. Herrera was called up when Overbay was placed on paternity leave. Given the fact that Overbay could only miss up to three days, it seemed Herrera would only see time in an emergency situation.

With Schafer out, Herrera has already gotten the opportunity to play, coming in as part of a double-switch Friday and pinch-hitting Saturday. He has struck out in both of his plate appearances thus far.

These next two weeks could prove to be crucial to Herrera's career moving forward. If he is able to maximize his production in any playing time he receives, the team could view him as an option to remain on the team for a longer stint. The fact that he is an above-average defender at 43 different positions is a huge plus, especially for a Brewers team with little flexibility. However, if he continues to flounder at the plate even his defense and versatility won't make him look good.