Maldonado came out of the dugout and laid a good one on Pirates' outfielder Travis Snider during a fight between Milwaukee and Pittsburgh in Sunday's series finale.

Brewers backup catcher Martin Maldonado has been issued a five-game suspension for his role in the Milwaukee/Pittsburgh brawl on Easter Sunday, reports Buster Olney of ESPN. He has also been fined $2,500.

Maldonado had not been in the lineup at the time, but laid a real good lick on Pirates outfielder Travis Snider in the middle of the brawl. Snider was sporting a heavy black eye yesterday from the incident. The whole thing started, of course, when Carlos Gomez stared at what ultimately ended up a triple, leading to Pirates starter Gerrit Cole walking to third base and jawing at him. It blew up from there, with the benches and bullpens clearing.

Carlos Gomez will appeal any suspension 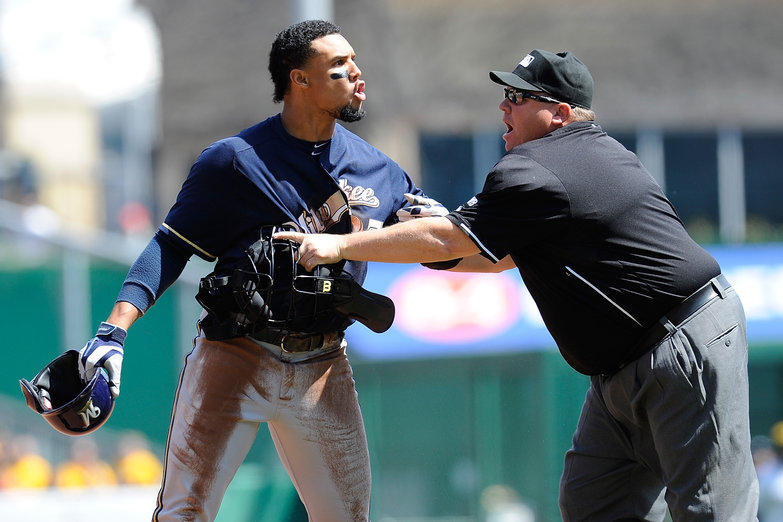 Carlos Gomez says he will appeal any suspension issued to him by MLB.

The Brewers started Maldonado in the opener of the Padres' series, giving starter Jonathan Lucroy a rest while they could in anticipation of a suspension.

Lucroy will handle starting duties over the next five games. The Brewers do not have another catcher on the 40-man roster, so any move to bring in a backup would be tricky. The team would have to clear a spot on both the 25-man and 40-man, with neither holding a clear candidate to be cut.

Instead, the team might just hope that nothing goes wrong with Lucroy. Unless there is another 14-inning game or an injury, he should have no problem making each start. If something does happen, however, Milwaukee will be in a tough spot. Logan Schafer had been the emergency catcher last year, but is currently on the disabled list. Now, I would assume Elian Herrera or Jeff Bianchi would fill that role as they can both play multiple positions.

With other developments, I would venture a guess that Bianchi might be the more likely to take over at catcher if something goes wrong. Though Herrera has more positional flexibility, he is the only bench player with extensive outfield experience. With Khris Davis sick with the flu and Carlos Gomez facing a possible suspension of his own, Herrera will likely be needed to start in the outfield. Both Bianchi and Mark Reynolds have some outfield experience in the corners, but neither is anywhere close to an optimal solution there.

The MLB has not yet officially announced suspensions, though they are expected to soon. Martin Maldonado doesn't sound like he will accept Pirates' catcher Russell Martin's offer to a fight for charity.