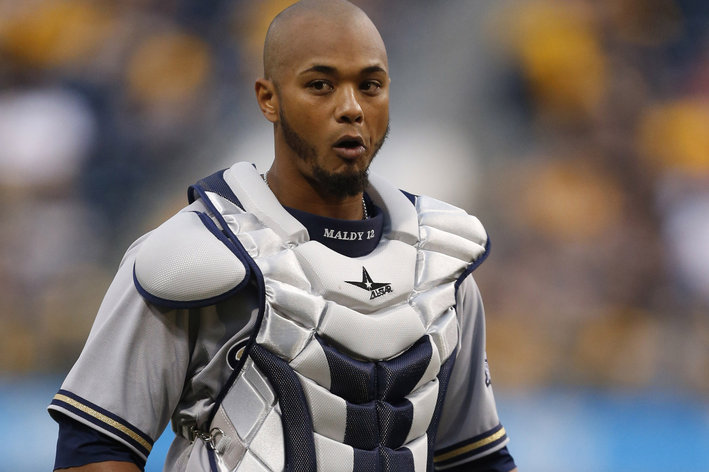 Martin Maldonado's five game suspension was reported earlier Tuesday. How will his absence effect the Brewers?

Suspensions will begin immediately for all players, starting with tonight's games. However, if any appeal their punishment, they would offset their suspension until the ruling is either upheld or the number of games is reduced. Carlos Gomez said following the fracas that he planned on appealing any punishment. However, on Monday he said he would wait to see what the punishment was before appealing.

Gomez appealing might be the best decision to help the team. With Khris Davis battling the flu, Elian Herrera would likely need to start in left field as the only backup with extensive outfield experience. Missing Gomez and Davis means Herrera would take over in center while either Jeff Bianchi or Mark Reynolds takes an outfield corner. Neither of the latter two have extensive experience outside of the infield and should really only be considered in an emergency.

The Brewers will have to play with a 23-man roster while both Maldonado and Gomez sit. MLB rules dictate the team is not allowed to call up a replacement player for these suspensions.

If you don't recall, the whole thing started when Pirates pitcher Gerrit Cole took offense to Gomez admiring what ended up being a triple. Had Gomez run off the bat, it would likely have an inside-the-park home run. Instead, with Gomez standing on second, Cole walked off and mouthed off a bit. That set the temperamental Gomez off, Travis Snider led a charge out of the bullpen, Martin Maldonado gave Snider a souvenir for his troubles, Russell Martin challenged Maldonado to an actual fight for charity, and that was that.

Overall, the punishments were probably about what was expected. Cole got off with no suspension, likely because he never instigated anything physical. It's a bit more difficult to suspend a player for mouthing off.