Curb Yo Enthusiasm: Is Yovani Gallardo's early-season success an anomaly?

The results in the run and wins columns are terrific, but don't let them trick you.

Share All sharing options for: Curb Yo Enthusiasm: Is Yovani Gallardo's early-season success an anomaly?

Yovani Gallardo is looking for a bounceback campaign in 2014, and has started it with two scoreless outings, the latest coming on Sunday afternoon against a resilient Red Sox lineup. An extended scoreless streak, the irrational hope accompanied by baseball in early spring, curveball renaissance rhetoric, and Gallardo's Weeksesque attachment to the concept of "potential" may lead us to rosy speculation.

In last year's context, that line against Arizona would likely be used as evidence that maybe Yovani hadn't loosened up for the season or was continuing a decline in pure stuff. He only managed to throw 64% strikes. Typical nibbling Yo. Only 6 swings and misses in 103 tries? Only 3 strikeouts for a pitcher who relies on them?  Bad signs.

Yesterday, Gallardo generated zero swings and misses. Zero. His strike percentage is about the same (60%). Yes, the Red Sox are notoriously patient hitters. Sometimes I wonder why some of them even bother bringing a bat to the plate. But Tyler Thornburg managed to get 4 swings and misses in 28 pitches. It isn't impossible.

So, how is his velocity? 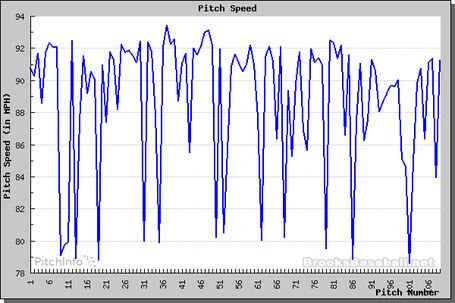 vs. Arizona a year ago: 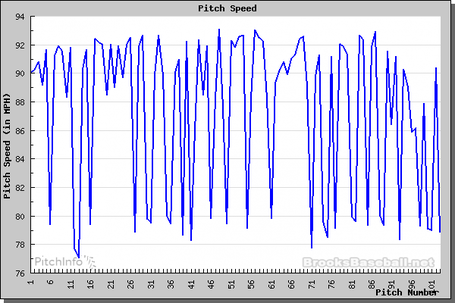 I had to double-check and make sure I didn't accidentally link the same graph twice. If you examine some more tabular data (here for Sunday's start, here for D'Backs start), you'll see further confirmation that the fastball velocity and movement is very similar, and the biggest difference in breaking stuff is simply its distribution: more sliders and less curveballs from 2014 Yo. For all the curveball talk this spring training, it appears Yo's was actually better last April. And he's using it far less.

Two of the 7 hits he allowed were for extra bases, and only once did he allow hits consecutively: his two final hitters. Zach Duke bailed him out of that jam in the 7th. He got more help from Khris Davis and Mark Reynolds, who both made flashy defensive plays. Clint Fagan's strike zone was so favorable that I just assumed Jonny Gomes would do something violent eventually. He never did - he's a pro.

I should revise that statement: Either the strike zone was favorable, or Jonathan Lucroy, the face of the catcher framing metric movement, really is prettay, prettay good. Check out the concentration below the strike zone: 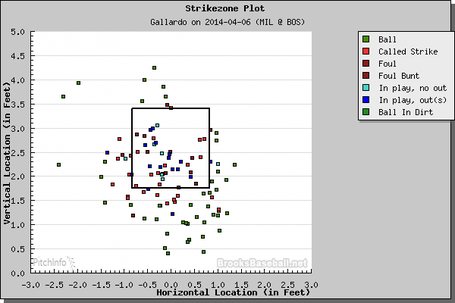 Throughout the game, the Red Sox just refused to swing at the below-the-knees balls called strikes. Out of principle, I suppose. To Gallardo's benefit! Because Gallardo was basically incentivized to pitch just below the knees (even more than usual), the ground balls followed. And 11 of 15 of them found defenders for outs. If he has undergone a conscious shift in philosophy away from the strikeouts he can't get anymore and toward generating ground balls, good for him. It worked on Sunday. Perhaps better results are sustainable. But I'm not yet convinced.

Hate to rain on the parade, but this latest start feels like an anomaly. It doesn't mean that Gallardo can't have a better season or that I don't think he's capable of improving. I just didn't see anything different from the Gallardo we remember from 2013 on Sunday. Despite the results.

All pitch f/x data courtesy of Brooks Baseball, game statistics courtesy of baseball-reference.com. The gifts that keep on giving. Luckily, they are more accessible than most: