Three thumbs up for the Brewers slugger, today.

Share All sharing options for: Brewers 10, Phillies 4: Team Braun is blasting off again

Maybe Ryan Braun's thumb won't effect his power numbers so much after all? After Phillies fans booed the bejeesus out of Braun in his first at-bat, he decided it might be time to have his best game of the young season.

Braun started out his day with an outstanding diving catch on a David Ruiz fly ball to end the second inning. Runners had been on first and second at the time, so that saved at least one run and possibly two. The game had been tied 1-1 at that point and it's very possible things may have ended up differently had Braun not made the snag.

Of course, that catch was only the beginning. He still had some work to do at the plate. In his second at-bat, he homered to left field to bring home three runs to tie Geoff Jenkins for the third most home runs in franchise history. In his third at bat, he sent a ball into the right field bleachers to pass Jenkins. And for a little emphasis, he hit another three-run homer in the eighth inning, this time to center.

Let's ask the fans how they feel about Braun passing Jenkins: 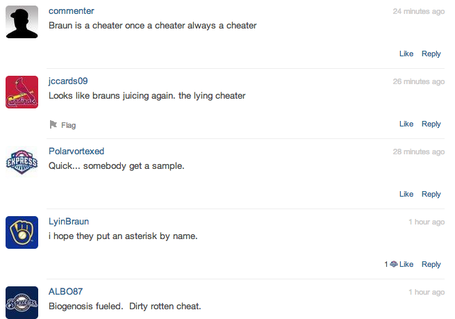 Braun finished with seven RBI on the day.  The rest of the Brewers' offense was on point, as well. Carlos Gomez and Jean Segura were the other two runs on each of Braun's three-run shots as Segura singled twice and Gomez doubled twice. Gomez also struck out twice and Segura was thrown out trying to steal twice. Jonathan Lucroy was 3-4 with a pair of doubles and a pair of runs scored. Scooter Gennett reached base three times and Mark Reynolds also picked up a couple of hits.

Kyle Lohse was not at his best today. He may have been getting squeezed a bit early on, but it didn't seem so bad. He finished just five innings while allowing three runs on seven hits and an uncharacteristic five walks. Jim Henderson came on in the ninth inning in a non-save situation and proceeded to throw a perfect frame with two strikeouts. If he keeps this up, he'll be back in the closer's role in no time.

That's a four-game winning streak for the Brewers. Over their last 24 games, the team is 16-8. Not too shabby! They'll look to keep it up tomorrow when Matt Garza faces off against Roberto Hernandez. First pitch is scheduled for 6:05 CT.