It does not appear likely the Brewers will sign Kendrys Morales, as Melvin does not believe his defense is adequate enough for him to play in the NL.

With Mark Reynolds likely taking over at third base for the short-term and Lyle Overbay likely being terrible at the plate for the long-term, the Brewers may be looking at other options for first base if they are not happy with the production they are currently receiving. Currently, Brewers first basemen (primarily Overbay and Reynolds) have the eighth-worst OPS at the position in the major leagues, ahead of just the Padres, Mets and Marlins in the National League.

The team has been rumored to have interest in free agent first baseman Kendrys Morales, who has been searching for a new home since turning down a qualifying offer from the Mariners last offseason. Brewers' GM Doug Melvin acknowledged having discussions about Morales, though it seems unlikely the team will sign him, according to Nick Cafardo of the Boston Globe.

Options to start while Aramis Ramirez is on DL 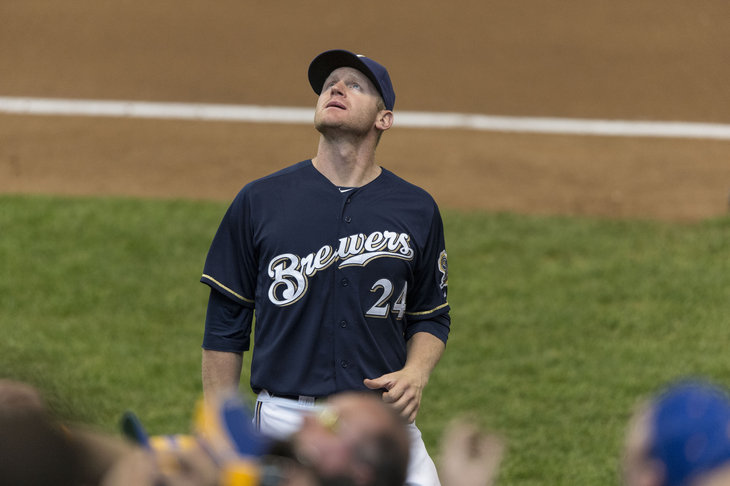 It appears Lyle Overbay will likely step into a bigger role over the next couple weeks while Aramis Ramirez probably heading to the DL. Is Overbay really the best option, though?

Melvin said the team has considered signing an outside player, but told Cafardo ""there are just a pool of players we can’t consider because of the National League-American League dynamic. That’s why I’m hoping we’re all playing by the same set of rules someday. It’s a reason we had to let Corey Hart go because we play 36 day games and it’s tough to come back after a night game."

Basically what it sounds like is Melvin and the Brewers don't believe that Morales would be able to handle first base moving forward and that he's more likely a designated hitter. Which is fine, Morales certainly isn't J.T. Snow defensively, to be sure. If he can't play in the field, he's useless for an NL team.

It's not as though the Brewers' have it terrible so far at first base, either. Though they're in the bottom-third of OPS, they still stand at .732 which, all-in-all, isn't so terrible. It's certainly tolerable, providing they get enough production elsewhere. Morales wasn't so much better than that last year when he hit .277/.336/.449. That's not enough of an upgrade that the Brewers could afford to pay him $5+ million, or whatever it ends up being.

And it's certainly not a big enough improvement that Milwaukee should think about forfeiting their first round draft pick for him. Because Morales turned down his qualifying offer, that stigma has been attached to him, which also means it grows less and less likely that he signs before the draft by the day. If a team waits until after, they no longer are required to lose a pick. That will likely be when Morales and shortstop Stephen Drew will both find a new team.

The biggest upside of Morales might be more assured production. Reynolds has been a coup for the Brewers thus far, with an .807 OPS and eight home runs after signing on a minor league deal. However, he has an all-or-nothing approach and has failed to consistently get on base. Morales is much better at putting the ball in play while maintaining nice power production himself. I don't think, offensively, there is any doubt Morales would be an improvement.

But, again, if he can't be trusted to play the field he has no use for the Brewers. And it certainly seems Melvin does not see him as a competent defensive player.

Scott Boras, Morales' agent, may be trying to work the Brewers and convince them to sign his client, but for now it looks like Melvin is having none of it. It appears the team will instead roll with the Reynolds/Overbay combo until one or both play themselves out of a job.