However, it seems he may be forced to miss a start. If so, the Brewers have a number of options to start in his place.

The good (?) news is that Yovani Gallardo is unlikely to be placed on the disabled list by the Brewers after he sprained his ankle and had to leave his start on Tuesday after just 3.1 innings. The bad (?) news is that Gallardo will probably miss one start due to the injury.

Those question marks may seem out of place a little bit after Gallardo's hot start to the season has him standing at a 3.51 ERA and 1.25 WHIP over 10 starts. That doesn't sound like a pitcher you would want to miss time.

The roster when Gorzelanny and Henderson return 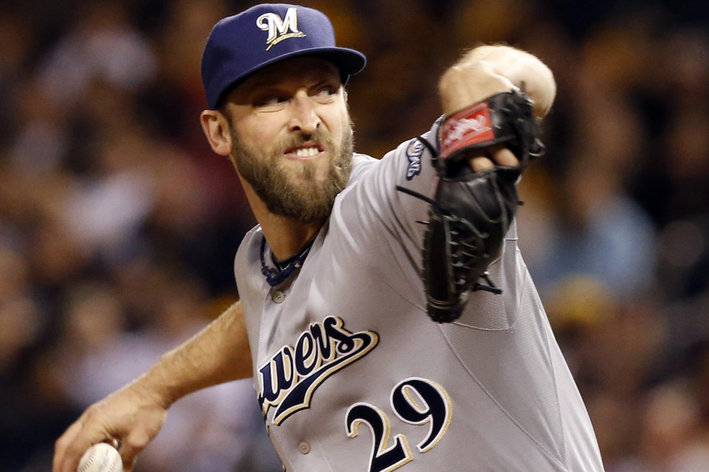 Who should be removed from the active roster when Tom Gorzelanny and Jim Henderson (and Aramis Ramirez) return?

However, a quick rest may do Gallardo some good. After the calendar turned to May, Gallardo's effectiveness took a big downturn. He has just one quality start this month in four tries to go along with a 6.33 ERA and 746 opponent OPS. Over 21.1 innings he has a 16:9 K:BB ratio. Prior to leaving his Tuesday start, he was in the midst of his worst outing of the year having already allowed four earned runs on four hits and three walks.

If Gallardo is forced to miss a start, as it sounds he will, who will start for the Brewers? Wei-Chung Wang has been the long-reliever for the team, but I can't imagine there is any possible way the Brewers would even think about letting him make a start after his lack of success so far this season.

Two of the Brewers top relievers have starting experience. Tyler Thornburg was a starter throughout the minors, but was put in the bullpen as he had nothing left to prove in Triple-A and no spot in the major-league rotation. One of the team's top prospects, he may have the most potential of any possible spot-starter.

Will Smith, meanwhile, was a full-time starter in his rookie 2012 season with the Royals. Last year, he made 13 major league appearances and started just once. This year, he is a big reason the Brewers' bullpen has been dominant. Despite being used as a reliever in the majors in 2013, he was in the rotation for the half of the season he was in the minors. He never managed to find success at the major-league level as a starter, however, thus the Brewers' use of him in the bullpen. The team has not ruled out the possibility of him transitioning back into the rotation at some point, however.

Zach Duke is another possibility, and my gut feeling is he may be the most likely choice. The Brewers seem to like letting veteran pitchers take spot starts, preferring not to mess with younger players when they are already in a position where they are succeeding. Duke spent his first six years starting full-time for the Pirates, then transitioned to a relief role when he couldn't cut it in the rotation. It would be very similar to what the Brewers ended up doing with Tom Gorzelanny last year.

Speaking of Gorzelanny, if he is ready to return he, too, could be an option to start. He ended up making 10 starts for the Brewers in 2013, clearly endearing himself as a starter when needed. He wasn't the best when relied on in that role, with a 4.81 ERA, but it's not like a team should expect their spot starter to pitch like an ace. The questions is whether Gorzelanny could be ready to pitch in just a handful of days. Given the fact that he has missed the entire season after offseason shoulder surgery, I doubt the Brewers would want to start his 2014 campaign with a long outing.

The other option open to the Brewers, and likely only an option so long as Gorzelanny (or Jim Henderson) is not yet activated from the DL, is demoting Rob Wooten to Triple-A and calling up either Mike Fiers or Jimmy Nelson for a start. Fiers has ample major league experience, while Nelson is the team's top prospect. Both have pitched exceedingly well for Nashville: Nelson has a 1.71 ERA in nine starts while Fiers has a 2.43 ERA. Nelson last pitched on the 19th while Fiers pitched last night, so it may be more likely for Nelson to get the call on extended rest.

Regardless of whether they choose to call up a player or use someone already on the roster, the Brewers have a variety of options to make a start of Gallardo can't go. They won't have the easiest task as they face the offensive juggernaut Marlins on the 25th. That's not sarcasm, which is weird. The Marlins are currently second in the NL with 4.74 runs scored per game.

Who would you prefer to see pitch for the Brewers, assuming Gallardo can't go?