The Brewers had the game firmly in control, until the seventh inning.

For for six and two-thirds innings, everything was peachy keen. The Brewers held a 4-2 lead with one out in the bottom of the seventh and seemed to be rolling right along to their second straight victory. Ryan Braun was forced out of the game early due to tightness in his side, but at least it seemed like the Brewers should win.

Of course, you can never assume anything in baseball. So the rest of the game from that point on pretty much sucked.

One out and Chris Johnson on first base in the bottom of the seventh. That's where we're picking up. Andrelton Simmons just flew out. Dan Uggla of all people followed that up with a single before starting pitcher Matt Garza was pulled in favor of Brandon Kintzler who immediately allowed an RBI double to Gerald Laird to cut the lead to one.

An RBI "double". What it really was, was this:

Not really Kintzler's fault, I'd argue, and possibly an inning-ending double play if fielded correctly. If anything, an out at first. Or at the very very least, no runs scoring as the ball is kept in the infield. Instead, we got that.

That would be Kintzlers only batter. Will Smith was brought in next, and promptly gave up a two-run single to give the Braves a 5-4 lead. With Braun out, and Aramis Ramirez on the DL, and Gomez out with a back issue, the Brewers really had no chance of a comeback victory. Their only baserunner over the remaining two innings was Logan Schafer, who was hit by a pitch to lead off the ninth.

Braun leaves game early with tightness in side 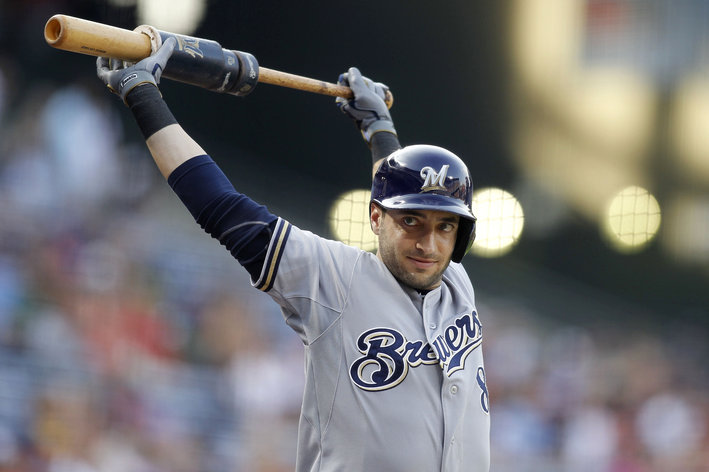 Ryan Braun may have re-aggravated his oblique in Thursday's loss to the Braves.

Craig Kimbrel then struck out the side, because #justCraigKimbrelthings.

On the bright side, Jean Segura went 3-5 with a double, and even stole a base without being thrown out! Maybe things are looking up for him after a tough start to the season. Jonathan Lucroy was also 2-4, continuing his excellent start to the season.

The Brewers move on to the Marlins next, in Miami. The Marlins have been a joke in recent years. Now, they are scoring the second-most runs per game in the NL and have been absolutely killing it at home.

Wasn't April supposed to be the tough month?