Ryan Braun and nagging injuries: is there a silver lining?

Braun's parade of little ailments are infuriating, but we must concede that his willingness to divulge them has largely kept him on the field for much of his career.

Share All sharing options for: Ryan Braun and nagging injuries: is there a silver lining?

Yesterday Ryan Braun once again departed early with a pesky oblique injury, once again provoking the impulsive, primal rub some dirt on it! reaction from frustrated Brewers fans everywhere, including myself. Particularly in Braun's case -- Ryan has had no shortage of obnoxious injuries over the years; the thumb, obliques, leg strains, elbow contusions, hip and intercostal strains, neck spasms, groin tightness, among others.

Fortunately, he has been able to play and remain effective through the vast majority of these minor ills as he has only spent 38 total career games on the disabled list. This could be slightly misleading, as we can't say for sure if Braun finishes a hypothetical unsuspended 2013 season healthy accounting for the nerve issue in his hand which has yet to be resolved. He has missed 12 total games on the active roster without a DL visit in the last three years (according to Baseball Prospectus).

It doesn't sound like much, but a wide variety of short-term injuries spaced out proportionally can paint the picture of an injury-prone player which can be concealed by a simple glance at the "G" column on his final line.

Take 2012, for example. Braun appeared in 154 games and hit a career high 41 HR, finishing runner-up for MVP. In May, he missed a game with soreness in his achilles tendon. Later that month, he reported another instance of groin tightness which bit him in spring training. In June he missed another game with the achilles, one with a hip flexor strain, and another from an elbow contusion after being hit by a pitch. In July, one game with the groin and another with a blister on his hand. He was considered day-to-day in September with a sore wrist, but never missed time. The entire season was a battle with his own body, but he was productive anyway (can't wait to here the suggested theories explaining this).

The constant stream of Braun injury updates throughout the season get annoying, and many people of the old-school variety may pine for the days of catchers silently taping up their compound fractures and gutting it out unbeknownst to his employer, but perhaps Braun's willingness to open up about his health has - so far - kept him from long-term harm.

Ryan Braun leaves game with tightness in side 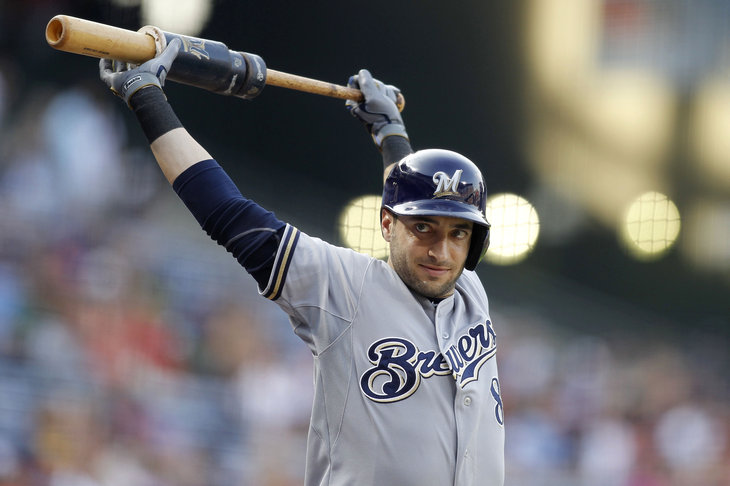 Braun left Thursday's game mid-way through as he may have re-aggravated the oblique injury that already saw him land on the DL once.

Ben Lindbergh of Baseball Prospectus notes that Prince Fielder, Jose Fernandez, and Felix Doubront are all players who have recently tried to ward off small injuries on their own; Doubront's status is still unclear, but Fielder and Fernandez are now done for the season. Lindbergh on Fielder:

Since Fielder’s season-ending surgery to repair a herniated disk in his neck might be the final nail in the Rangers’ coffin, it’s tempting to wonder whether they could have avoided having it hammered home. Daniels noted that Fielder began to experience stiffness and discomfort in his neck last season without ever telling the Tigers, and he didn’t tell Texas until fairly recently, when the symptoms became more severe. Daniels believes that the weakness in Fielder’s left arm caused by the injury was the source of the slugger’s power problems, and now the same ailment is responsible for his extended in-season absence.

If Fielder had told the Tigers about the problem late last season (which might have prevented the trade) or even informed the Rangers after they acquired him in November, perhaps the symptoms could have been managed more effectively, or the surgery avoided. If not, he could have had the surgery sooner and been back by Opening Day (or shortly after). Instead, he’s sitting out the part of the year in which he’s paid to produce.

Fernandez' case is a little different; he felt a "pinch" in his elbow in the start before his last, but chose to withhold it for a reason that has been echoed infinitely:

"I felt a little sore in the fifth or sixth inning [of the Dodgers' game]. I felt a little pinch. I don't remember what pitch. Nothing I hadn't felt before. Pitchers feel that all the time when they throw hard stuff. I went through my bullpen and everything was fine.

Fernandez may have been screwed right from the first pinch. We can't know for sure. But Fielder sat on his injury for months. Exacerbating the situation is the fact that he swapped teams in the interim. Now the Rangers are paying for an injury attained when he was with his former team who knew nothing about it. That's not a great start towards establishing a positive environment with a new team. Of course, Fielder didn't know he would be traded, so some of this is out of his control, but this is the kind of thing that can happen when a player keeps his health to himself instead of sharing it with the professionals.

When Braun addressed the re-inflammation of the nerve in his hand earlier this season, he made a comment that you may not hear from a typical proud athlete:

The last resort is surgery, an option Braun refused last year and remains, for now, adamantly against.

"The only two surgeries we knew of last year, neither of them were appealing," Braun said. "Look, I rely on the advice of people who are much more knowledgeable on this stuff that I am." (via McCalvy)

When I need the ball joints on my car replaced, I either hit google, youtube, and the liquor store and spend a weekend figuring out how to do it while completely exhausting myself, or if I have a few bucks saved up I take it to the shop and read the newspaper for a couple hours. Braun has instant access to health professionals everywhere he goes. Why not trust them? Concealing injury not only potentially damages future health, but kills production as the condition worsens. Which is exactly what Braun has experienced since he was activated from the DL on the 13th.

If you're as tempted as I am to rag on Braun as a "wuss," "weakling," "poltroon," or my personal favorite "wheyface," (thank you, thesaurus) understand that it may be a very good thing he is as explicit about his health as he is. It may be staving off a significant injury that can derail a season.