Should have been a Brewer: Pete Incaviglia

Some baseball players, like Mark Reynolds, were born to be Brewers. But some never wear the uniform. One of them is Pete Incaviglia.

Share All sharing options for: Should have been a Brewer: Pete Incaviglia

Mark Reynolds is off to an excellent start as a Milwaukee Brewer. Not necessarily because of what he's producing, but how he's producing it. He is leading the team in home runs. He swings and misses like crazy. He is kind of awkward. He's playing defense awfully well despite a less-than-stellar reputation on account of being blind. You could say he's always been a Brewer. It's just that he's only recently started actually playing for them.

Another Brewer-at-heart is former free-swinging slugger Pete Incaviglia, pronounced Inka-vill-eeya and known as "Inky."* Incaviglia was the Montreal Expos' 8th overall pick in the 1985 draft. He was a highly touted muscly slugger coming out of Oklahoma State, ready to unleash his prodigious power at the highest level. But Incaviglia was not too thrilled with the idea of suiting up for the Expos, so he refused to sign unless Montreal guaranteed to trade him (via the New Biographical History of Baseball).

*Surprisingly, Ron Roenicke had nothing to do with this.

In November of '85, he signed with the Expos and was immediately traded to the Rangers in exchange for two people who presumably played baseball at the time - Jim Anderson and Bob Sebra (for all Incaviglia transactions, click). The Expos traded him to the third worst team in the league as punishment for his anti-Canadism. Incaviglia didn't play a single minor league game before becoming a full-time right fielder for the Rangers, which likely played in a significant role in stunting the growth of his career.

MLB understood the impact of this precedent for bad teams with high draft picks and instituted the Pete Incaviglia Rule, which states that a team cannot trade an amateur draft selection until one year after he signs.

The Brewers had the first overall pick in '85, but chose shortstop B.J. Surhoff over Incaviglia, among others (Will Clark, Barry Larkin, and Barry Bonds). The names enclosed in parentheses in that last sentence may provoke a small pang of regret, but there have been far worse draft blunders - Surhoff was certainly a valuable player. But how did the Brewers say no to this? 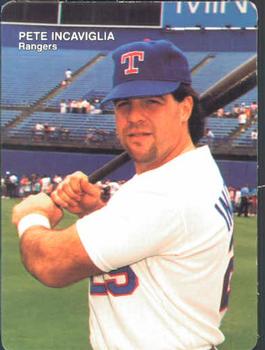 Just look at him. The muscles, the face, the hair. That's a Brewer. He was even most comfortable in the confines of County Stadium - he hit more HR there (9) than any other road ballpark. It's because he knew he belonged there.

The first qualification for filling out a Brewers uniform is dinger ability. Incaviglia is one of 25 players to hit 30 or more HR in his rookie season. He's on the same list as Ryan Braun (the only Brewer), Ted Williams, Frank Robinson, Mike Trout, Mark McGwire, Ted Williams, Jose Canseco, Mike Piazza, and Albert Pujols. He is one of only 16 players to hit 20 HR in each of his first 5 seasons (Giancarlo Stanton will join that list after this season). The 124 homers he hit in this timeframe are 18th most among players with with as many or fewer plate appearances.

Incaviglia holds the major league record for strikeouts as a rookie with 185. Check out the list of players with the most strikeouts and as many or fewer PA as Incaviglia:

It is conceivable that if Weeks struggles enough to close out 2014 that 4 of the 5 top strikeouters amongst players with 4,677 career PAs or fewer are notable Brewers. The other? Incaviglia.

In the '85 campaign he blew away the field in errors committed with 14 in right field (The runner-up? You guessed it, Milwaukee's own Rob Deer). The Rangers moved him over to left the following season, which had no effect on his ability to do things wrong; 13 errors in the other corner of the outfield once again led the league at the position in '87. His proclivity for strikeouts and fielding blunders combined with the allure of his power potential led to him being shipped all over the country - he played for seven different teams in his twelve year career.

Horrid defense? Check. Bouncing around the league? Check. A decent career marred by the failure to deliver on bloated expectations on account of being drafted in the first round and/or an undue focus on aesthetic flaws? Check.

The Brewers have also developed a reputation for bothering the police of baseball's unwritten rules of professionalism. Incaviglia would fit right in:

Incaviglia is generally regarded as a relative disappointment - a "what could have been" kind of story. If he had been a Brewer, maybe he re-inflames the "wallbangers" moniker in the late '80s. Surely there are pockets of Phillies or Rangers fans who hold a certain affection for him, but Milwaukee fans have a distinct appreciation for players like Incaviglia.

So appreciate Mark Reynolds while you can, because sometimes a Brewer never gets to be one.