Jonathan Lucroy might be the best dollar-for-dollar value in the MLB this year and still has plenty of time left in his contract. Still, the Brewers may need to start considering how much they may need to pay him in the future.

Share All sharing options for: A look at Jonathan Lucroy's contract and the potential for a future extension

Given his performance this season and his contract, there is an argument to be made that Jonathan Lucroy might be the best value in the MLB right now.

Way back in the 2011/2012 offseason, Lucroy was coming off his second season in the majors, and his first as the full-time starting catcher. Over 136 games, he had an alright year for a backstop, hitting .265/.313/.391 and managing the pitching staff well. Lucroy looked like he would be a good catcher and the Brewers, who had struggled to find a long-term solution behind the plate, decided to lock him up.

That decision couldn't have gone any better for Milwaukee. That offseason, Lucroy signed a five-year deal worth $11 million with a team option for a sixth year. That's an average of less than $2 million per season over the guaranteed years of the contract. This year, Lucroy is earning $2 million. Next year, he gets $3 million. In 2016, $4 million. If the Brewers pick up his 2017 option, he'll get $5.25 million. 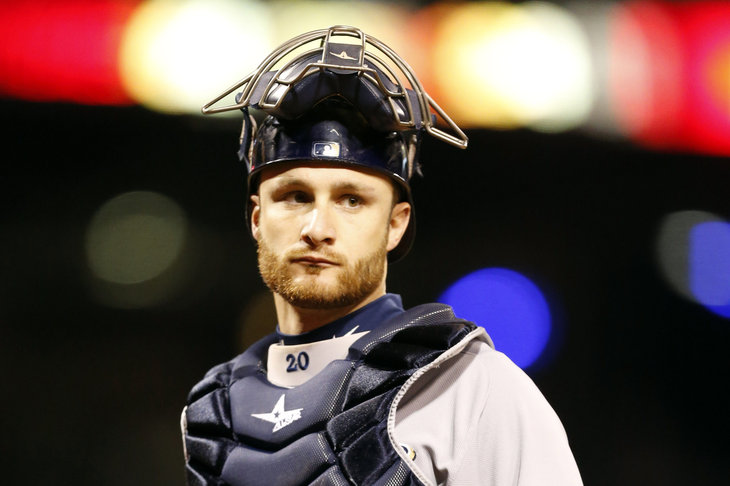 Eventually, Lucroy is going to have to get paid like the player he has become. And I think everyone hopes that he will re-up with the Brewers. Though he has another three years on his contract, Milwaukee may want to attempt to lock him up soon. There is precedent for it -- the Brewers like to lock up players early. See: Lucroy's contract, the Brewers' efforts to lock up Jean Segura already, and the Brewers re-upping with Ryan Braun when he had five years remaining on his own below-value contract.

When the Brewers do eventually start to look at extending their hopefully soon-to-be first-time All Star catcher, what kind of deal might they be looking at?

Joe Mauer, of course, became (before he moved to first base) the highest-paid catcher in MLB history when he signed an eight-year, $184 million deal with the Twins in 2008. However, there are a couple of other, more recent, deals that would likely be more of precedent for a Lucroy deal.

The first is that of division-rival Yadier Molina. Molina signed a five-year deal worth $75 million two years ago, just before the start of the 2012 season. Molina was considered by many to be the best catcher in the game at that point and had been coming off a breakout season as he hit .305/.349/.465 in 2011 with 14 home runs. Of course, Molina would go on to become a big-time MVP candidate the last couple of years. Before that breakout 2011 season, however, Molina had just a 688 career OPS over seven seasons. He was 28 when he signed his extension with the Cardinals.

Jonathan Lucroy is currently 28. Though he did not reach the majors as early as Molina, Lucroy has been a better hitter at the start of his career than Molina was at his. Over his first four years, Lucroy managed to hit .279/.331/.426. This year, he may be having a big-time breakout year. After blasting a two-run homer against the Mets Thursday, Lucroy is now hitting .336/.398/.513 with five home runs. Molina's calling card was always his defense, and Lucroy is no slob in that department either, with pretty much everyone catching on to his outstanding framing abilities now along with solid 'traditional' catcher defense. Lucroy also has a nice 3.55 catcher ERA this year.

The second precedent for Lucroy, in large part because of it's more-recent nature, is that of new Yankee Brian McCann. McCann has been one of the best catchers in the game both defensively and offensively for years. That has led him to sign a 5 year deal worth $85 million -- just $10 million more than Molina for the same span. McCann may be a better comparison to Lucroy as well because while he has been great, I don't think anyone would have considered McCann close to the 'best' catcher in the game when he signed his deal. At this point, I don't think we can say that Lucroy is the best, either. If he keeps hitting like he has been, maybe. But I don't think we can count on that.

And therein lies part of the problem for the Brewers when potentially considering a deal for Lucroy. Even if he keeps up this hitting for the rest of 2014 and finishes with a 900+ OPS, can Milwaukee pay him as though he'll keep hitting that well? Can they expect him to be as good as he has been this year? Or do the Brewers wait and see how he plays in 2015 before really starting in on an extension? By doing that, they run the risk that he fully legitimizes himself and becomes even more expensive. Imagine if the Cardinals had waited one more year before working on a deal Molina and had to pay him after he hit for an 874 OPS with 22 home runs and finished fourth in the MVP vote.

The Brewers have 2.5 more guaranteed years of Jonathan Lucroy, with an option for another that is sure to be picked up. Over that span, he'll be paid another $13 million at most, with nearly half of that coming in the option year. The team has plenty of time before they need to consider extending him at all. But his performance this season may very well start forcing the Brewers to wonder how much they'll have to pay to keep him.