Kirk Gibson, the Brewers, and the idiocy of intentionally plunking a player

Kirk Gibson is a dick. So is Kevin Towers. He's also apparently pretty terrible at managing a baseball team.

Share All sharing options for: Kirk Gibson, the Brewers, and the idiocy of intentionally plunking a player

Oftentimes, in baseball, I find myself with a foot in two separate camps. On one side, I love the game for it's tradition and long-standing rules. It's why, in my heart, I tend to be against adding more playoff teams or installing a hard salary cap. I think the history of the game is groovy, and want the magic old-timeiness to stick around.

On the other side, I'm a proponent of newer stats or sabermetrics or whatever you want to call them and reject using batting average and RBI as indicators of how good a player is on their own merit. I'm not as hardcore about it as it seemed a lot of people were around the time Fire Joe Morgan was in it's prime. I think there can be value in the traditional stats so long as we know where that value lies and how far it actually extends. A player with 100 RBI isn't a good player simply because he had 100 RBI, but it does indicate that maybe he's good at getting a ball in play when he needs to which, of course, has some value.

But when it comes to baseball's 'Unwritten Rules™' there can be no doubt that I find most of them ridiculous. Kirk Gibson is a proponent of those good ol' boys and their hard-nosed play and you gotta look out for yer teammates and baseball is a rough and tumble sport.

Kirk Gibson is an idiot. Here is Kirk Gibson last night (if the gif doesn't automatically play, click it and it will):

That Marshall guy must have done something pretty good! I would have guessed home run, but he's a relief pitcher and the celebration would probably be closer to bedlam if that were the case. So, he must have struck out somebody important in a big moment, right? To get an emphatic fistbump from his manager (albeit a manager with a tendency to fistbump)?

Thoughts on Evan Marshall, Ryan Braun and the unwritten rules 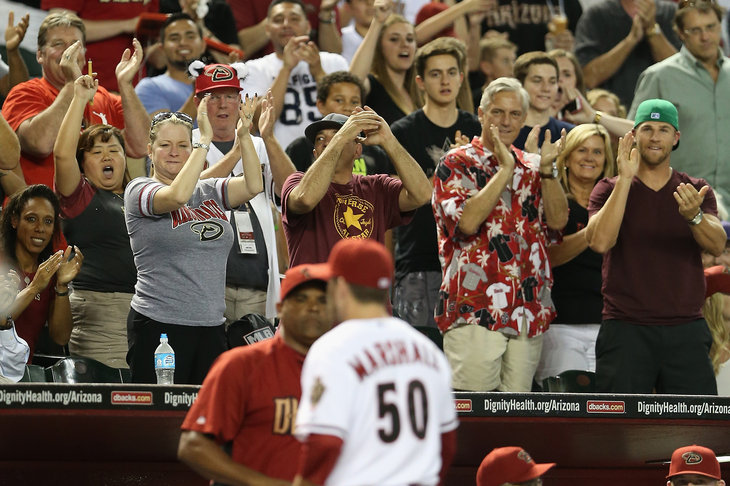 Read what our friends over at AZ Snakepit think about Kirk Gibson and the D-Backs' actions last night.

It's not even like the Diamondbacks and Kirk Gibson could justify hitting him because the Brewers' intentionally threw at them first. Kyle Lohse did hit a couple of batters (barely getting shortstop Didi Gregorious in the first and hitting Chris Owings in the helmet in the sixth). He also nearly hit pitcher Mike Bolsinger as he was trying to bunt. But not a single one of those looked intentional. Again, Gregorious was barely hit. Bolsinger's was clearly a curveball that got away. And even the worst people don't intentionally throw at someone's head.

But the Diamondbacks have this really terrible organizational philosophy led by Gibson and GM Kevin Towers that they will be manly-men and threw at people. Towers said last offseason that he wanted an eye-for-an-eye approach in Arizona. Clearly, something horrible must have happened that needed retaliation. Like, uh...like the Dodgers eating bananas?

And, certainly, Braun wasn't a target by chance. Team's stars are often the players being plunked in retaliation, but Gibson also has been among the more vocal critics of Braun's usage of steroids.

"If I get a chance to see Braun, I've got a question for him right to his face, you know?" Gibson said Sunday before a game against the Pittsburgh Pirates. "Is he about rehearsed (enough) by now, you think? About ready to come out? He's probably practicing at the theater school somewhere. Just you look at how things like that can influence people's opportunities and an opportunity to do something like that."

So, Gibson probably took punishment into his own hands. Saying, essentially, that MLB's mandated punishment (actually 15 games more than the usual mandated punishment) wasn't good enough and that he must absolutely do something about it. Like try to actually hurt him and knock him out of a game.

Anyway, we all know what happened next. Jonathan Lucroy came up and hit a Grand Slam because the Diamondbacks intentionally walked the bases to bring up one of the best hitters in the National League this year. The Diamondbacks have gotten very good at losing, but this is a special kind of ineptitude. I guess that's why the Diamondbacks are one of the worst teams in the MLB this year.

In conclusion, Kirk Gibson and the fans who cheered Marshall for the intentional plunk: