To the vehement Braun haters, I say thank you

"Cryin' Fraud got what he deserved!" -almost certainly someone in a comments section online somewhere

Share All sharing options for: To the vehement Braun haters, I say thank you

Ryan Braun cheated. Then he lied about cheating. That sucks and I get why people don't like him. However, there are some people who just can't let it go and I love them for being unable to control themselves. You see, as a fan of the Brewers there's nothing I could ever have said or done to help the general baseball fandom get over Braun's indiscretions any better than these hyper ninnies have done by hating him as vehemently and vocally as they have.

It's the middle of June and these people still have not let up and after last night it appears as though Diamondbacks' manager Kirk Gibson would like to lead the charge and by Odin I love the dumb gritty bastard for it.

If you aren't aware what happened last night, I'll walk you through it. In the 7th inning of last night's game the Diamondbacks where leading the Brewers by a score of 4-3. Lyle Overbay and Scooter Gennett were the first two batters due up. Here is how they handle left-handed pitching respectively: 167/211/167 and 107/138/107. The only thing more hilarious than those slash lines is the fact that Kirk Gibson put in a right-handed pitcher to face them. I was honestly flabbergasted and I noted this on Twitter.

Why would you put in a righty to face two guys who couldn't hit a baseball off a tee if it was put there by a lefty? The answer soon presented itself, but not before Overbay singled and Gennett doubled. With first base open (and let's be honest it was happening if the base was occupied) tough guy Kirk Gibson forced his 24 year old rookie reliever to drill Braun. The funny thing is it took two pitches to do it. This also highlights Gibson's stupidity because had the ball gotten away (which it almost did because the first pitch went behind Braun) it could have scored the game tying run.

By the way, when I wrote forced, I meant forced. Whether Evan Marshall thought it was a great idea, or not, to intentionally throw at someone, he's a rookie and a reliever and he had no choice in the matter. I feel I have a strong moral center and if I was Evan Marshall I'd have hit Braun too. I'd have done it because I wouldn't have known what else to do and I wouldn't have wanted to let my team down or look weak. I'd have done it because I was a little scared or intimidated. I'd have done it with a sick feeling and a pit in my stomach because I thought I had no other choice. It was a pretty reprehensible thing for Gibson to do.

Kirk Gibson, the Brewers, and the idiocy of intentionally plunking a player 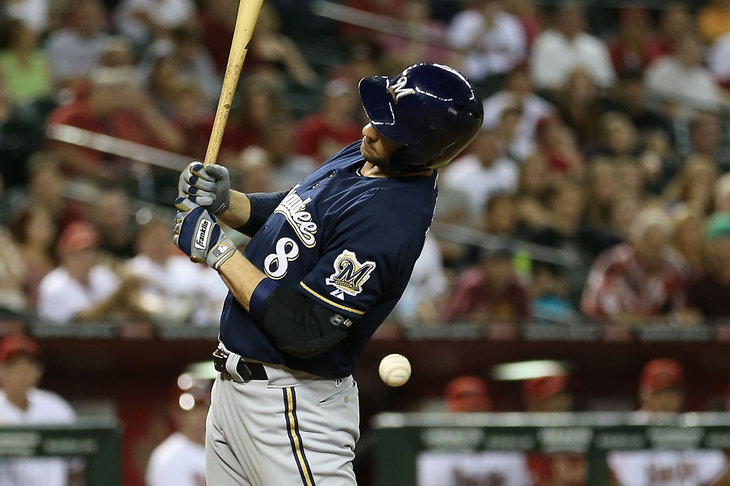 Kirk Gibson is a dick, and an unintelligent one at that.

And if there is still any doubt Gibson chose Braun because of the PED thing, here is Braun's slash line for June: 206/276/353 and here is Jonathan Lucroy's: 397/435/746. Gibson loaded the bases not because it was a smart baseball move. In point of fact it was a terrible baseball move for every reason imaginable. Gibson did it because he has a personal grudge against Braun for whatever reason. In doing so, he showed it's more important to him to settle said grudge/prove a point/whatever dumb thing you want to insert here than it is to win a baseball game.

Anyway, the Brewers got the last laugh for a few reason, perhaps none more satisfying than the grand slam Jonathan Lucroy crushed on the first pitch from Brad Ziegler who came into replace poor Charlie Brown. But there's another reason and this brings us back to my point about Ryan Braun.

These people that hate Ryan Braun so intently and cheer meatheads like, well quite frankly, the entire Arizona Diamondbacks organization are actually turning him into Jaime Lannister. Jaime is a kingslayer, kinslayer, oath breaker, sister um...lover, a bit of an arrogant twat, and he crippled that little boy. He's a monster and you hated him, but damn it if you didn't fall in love with his character the second that one thing happened... (Also, don't give me that SPOILERS!!! crap you fools. You should have read that or seen it years ago.  Hey guess what? Darth Vader is Luke's father. Gandalf isn't really dead. Everyone dies except Mr. Pink. Christopher Lloyd's character framed Roger Rabbit and he's actually a toon as well. Suck it up you weirdos).

They're turning him into school yard bully Scott Farkus who yes, has yellow eyes so help me god yellow eyes. But don't lie, you felt bad for the guy after Ralphie crushed his face.

It's gotten to the point where you kind of start to feel sorry for Braun too or at the very least you roll your eyes when someone says something mindlessly derogatory. And for that I can't thank those angry children enough for doing what I never could have.