On Brewers Second Basemen: Platoon is not a dirty word

At least it's not a dirty word in English. The only other language I know is French and I only speak about 30 words of it. For all I know "platoon" could mean something horrible in Flemish.

Share All sharing options for: On Brewers Second Basemen: Platoon is not a dirty word

Maybe it's lazy, but I was really having trouble getting this article to flow nicely. So instead of beating my head against the wall, I'm dividing it into two parts. Part one deals entirely with Scooter Gennett, the second part deals with the broader subject of the Brewers current platoon at second base.

On not understanding Scooter Gennett (so far)

Lately I've been reading a lot of tweets, comments, and even some articles from real journalists touting Milwaukee's young second baseman Scooter Gennett. It's wonderful that he's getting recognition because he really is having a great season. However there is something that almost never gets mentioned. This something is a huge part of why and how Gennett is putting up such great numbers and it's getting glossed over. This something is the fact that he's playing in a platoon where he doesn't face lefties.

The most egregious of these articles (that I've seen) is the one recently put out there by Rob Neyer. Take the time to read it here. Neyer notes that Gennett's wOBA would rank 3rd among qualified second baseman in MLB last year and this year.  He then suggests that the reason Gennett isn't considered one of the best second baseman in baseball is because of his defense. There isn't a single word about Gennett being in a platoon in that whole article. I don't know if Neyer was ignoring Gennett's inability to hand lefties or if he was just unaware. However, by not mentioning Gennett's splits I think he does him a disservice. If people don't understand what Gennett is, they're not going to understand why he suddenly isn't putting up the same kind of numbers if he's ever not in a platoon (next year?).

That's a real problem because the hard truth about Scooter Gennett is that he is nothing more than a platoon second baseman. Some people are going to be angered by that statement. That's a problem those people have to work on, because I didn't just insult Scooter Gennett. I'm simply giving a fair analysis of him as a player. Platoons aren't bad things and it'll be better when everyone can understand that.

Here is why I say he's nothing but a platoon player:

Before we go any further with this, there are a few things I want to make clear. Scooter Gennett's splits against lefties at the MLB level are a bit misleading. For one thing, they come in a much smaller sample size because he's in a platoon. This also means he's facing mostly or entirely relievers at the major league level. That's part of why there is such a drastic drop. He's also facing better pitching than he did in the minors. If he were to face lefties on a more consistent basis I have little doubt he'd get those numbers up to a point. That doesn't mean he'd be good or even okay against them.

He hasn't hit lefties since A+ and even then he didn't hit them particularly well. This is why I always roll my eyes when people say "he won't get any better if he doesn't face lefties." He's had years to improve against them and he's only gotten worse. He's not suddenly going to do at the major league level what he could never do at the minor league level. That's okay though. The majority of pitching is right-handed, and Gennett hits them quite a deal better:

That table represents Scooter Gennett's triple slash versus right-handed pitching. That's good. That's pretty damn good. As a matter of fact, he's been the 19th best batter in all of baseball versus right handed pitching so far this year. However, that doesn't change how poorly he hits against LHP. Putting Gennett in a platoon optimizes his output and therefore the total output at second base.

So, for those that might take my classification of Gennett as nothing more than a platoon player as an insult, I have one very simple question for you. As bad as he is versus lefties, if you don't have to put him up against them, why would you?

Defending the Brewers second base platoon (and Rickie Weeks)

I can think of few reasons why a person might want Gennett to be the everyday player. If you believe his defense makes up for his lack of offense you might want him starting every day. He's solid defensively, but he's not great so I don't think that's a good enough reason. As mentioned above, some people think Gennett will miraculously get better by seeing LHP more frequently. As mentioned above, I don't buy that. 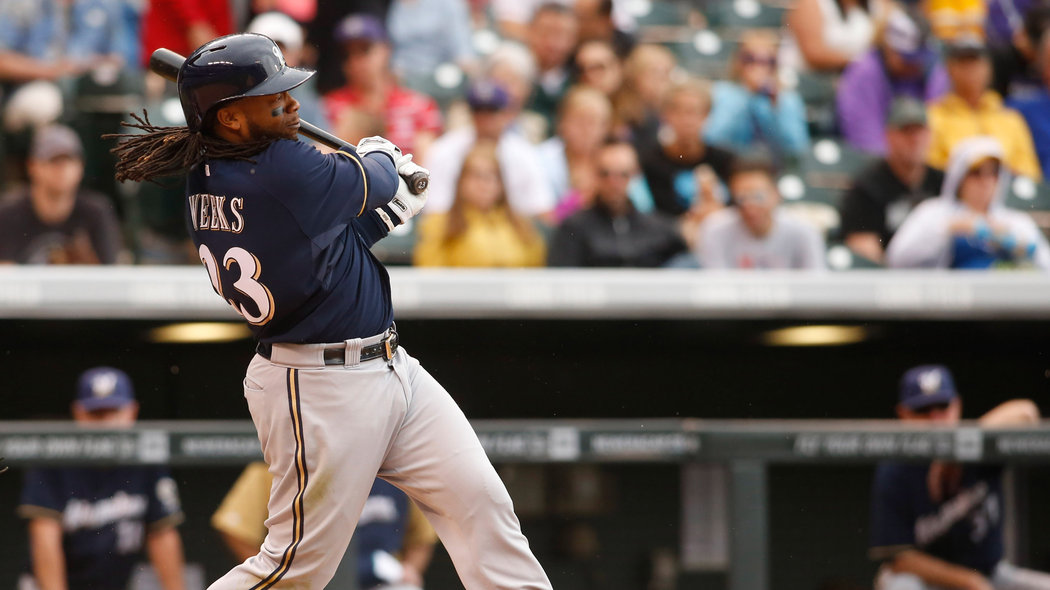 Toronto is looking for infield help, but apparently feel that Rickie Weeks' is too much of a defensive liability to make a trade worthwhile.

Maybe the best reason is to not waste the roster spot on a platoon partner. This notion also has it's flaws. If you have a guy like Ben Zobrist (just as an example) then you're not wasting the roster spot because the guy can play multiple positions (most importantly shortstop). The current situation with the Brewers is obviously much different. They're using two players that are second baseman only (a situation made worse by having a pseudo platoon at first base with one guy who can only play first, but that's another conversation). Here's the thing though, even if Rickie Weeks is partially wasted by only playing the 1 position, he's not blocking a single good in-house bench player.

I challenge anyone to name 1 player the Brewers have in the minors that will provide more value to the team than Rickie Weeks does starting and pinch hitting versus lefties. You can't because there isn't one. Logan Schafer? -0.03 fWAR for the Brewers this year. Caleb Gindl? -0.02 fWAR for the Brewers this year, 91 wRC+ in AAA. Hunter Morris? 92 wRC+ in AAA and he also presents defensive issues as he'd be the 3rd first baseman (2nd first baseman only). Sean Halton? Copy and paste the Morris info.

Even if you believe one of these guys would serve the Brewers better than Weeks, you have to understand that they'd be getting into fewer games. Weeks starts every time the Brewers face a LHP (25 games in the first half of this season). These other guys would only start when a guy needed a day off which would lessen their impact. In addition to that, having one of them instead of Weeks means Scooter would be facing LHP. That's hurting the offense in every game started by a lefty.

Here's Weeks' slash line versus lefties this year so far: 263/344/463 (126 wRC+). Gennett wouldn't get close to that. I'm not sure if there's Brewers minor leaguer who'd get close to that coming off the bench either. So what's the net gain by replacing Weeks' platoon role with that of a pure bench player? It's hard to say, but I think the only actual gain would be from positional flexibility. I think in almost any scenario, the offense is taking a significant hit.

I will concede that continuing the platoon at second base next year is a completely different conversation. The Brewers can get out from under Weeks' salary and that money could potentially provide more overall value than his role in the platoon. However, for right now his benefit to this team shouldn't be understated. Gennett can't face LHP and unless the Brewers can get a guy like Zobrist to replace Weeks, they'd be worse off without him.

Platoons (and the players involved) are derided and misunderstood. They're the Frankenstein's Monster of the baseball world. But when the right players are involved, they're effective. Maybe it's simplest to let the numbers speak for themselves. Among all teams at second base the Brewers' platoon is tied for 5th in fWAR (2.4) and 3rd in wRC+ (121).

All other statistics courtesy of Fangraphs