The Brewers and the Cardinals (and the Pirates and the Reds) are locked in a heated battle for first place as baseball heads towards the All-Star break.

The St. Louis Cardinals. The bane of our existence. They're our arch-nemesis, perhaps the very antithesis of the Milwaukee Brewers. They're coming to Miller Park with a chance to take the lead in the division with a sweep (pending the outcome of the Pirates-Reds series). They're coming into this weekend series tied 3-3 with Brewers on the season so whichever team wins this series could very well take the season series lead, and the division lead going into the All-Star Break. A win is a win is a win, but for purposes of fandom, this is a big series.

You never hope for an opponent to get injured and you certainly don't enjoy it when it happens. However, it must be noted that Yadier Molina suffered a pretty significant injury. He tore a ligament in his thumb and will miss a good deal of time recovering from surgery. It's entirely possible Molina does not play another regular season game in 2014. Molina is universally recognized as one of the best catchers in baseball if not the best. Defensively it's possible he doesn't have an equal. Offensively he has been just okay this year (111 wRC+). His biggest impact may have come in the form of calling the game. His absence could have repercussions throughout the Cardinals pitching staff.

Coming into games on Thursday the Cardinals as a team had scored third fewest runs in baseball. That'll get worse without Molina, but as I mentioned he hadn't been the offensive dynamo of the past few years. I was mildly curious how they've scored so few runs. Among the 9 players with the most plate appearances 6 (one of which was Molina) have had wRC+ above 100 (league average).

Upon closer inspection I noticed that only 3 players have a slugging percentage over .400. Those players are Matt Adams (.562 SLG%), Jhonny "Yeah That's How I Spell Johnny What Are You Gonna Do About It" Peralta (.441), and Yadier Molina (.409). As a team the Cardinals rank 25th in slugging. This makes so much sense when I think back about all the times they've pummeled the Brewers with those damnable "BABIP'd" innings where they single in 3 runs.

The Cards bullpen is pretty decent. Pat Neshek is having a career revival (27.3 K% and a 3.0 BB% with a 0.57 WHIP and 0.73 ERA). I believe Trevor Rosenthal is still their closer. He's been roughed up a few times this year. He's still striking out at a decent rate (28.9%) but his walk rates are ridiculous (13.9%). The rest of the bullpen is good but nobody else really strikes me as lights out. Kevin Siegrist will give Scooter Gennett and Lyle Overbay nightmares though. UPDATE: WyoCardsFan was kind enough to point out that Siegrist on the DL. My bad. In his place is Sam Freeman. His K% is less than Siegrist's but he's still fared quite well against lefties. Gennett and Overbay will still have their hands full.

Joe Kelly will be making his first start since April 16th (coincidentally against the Brewers). He left that game early with a hamstring injury and was subsequently placed on the 60-Day DL. Kelly always kind of struck me as the Cardinals version of Mike Fiers. I don't mean they throw similar pitches or anything, I just mean they're both kind of mediocre borderline major league/quad-A starters. While Mike Fiers lived on his deception to get strikeouts, Kelly relies on his ability to get ground balls. He has a fastball he throws in the mid-90s, curveball, slider, and a show-me change. 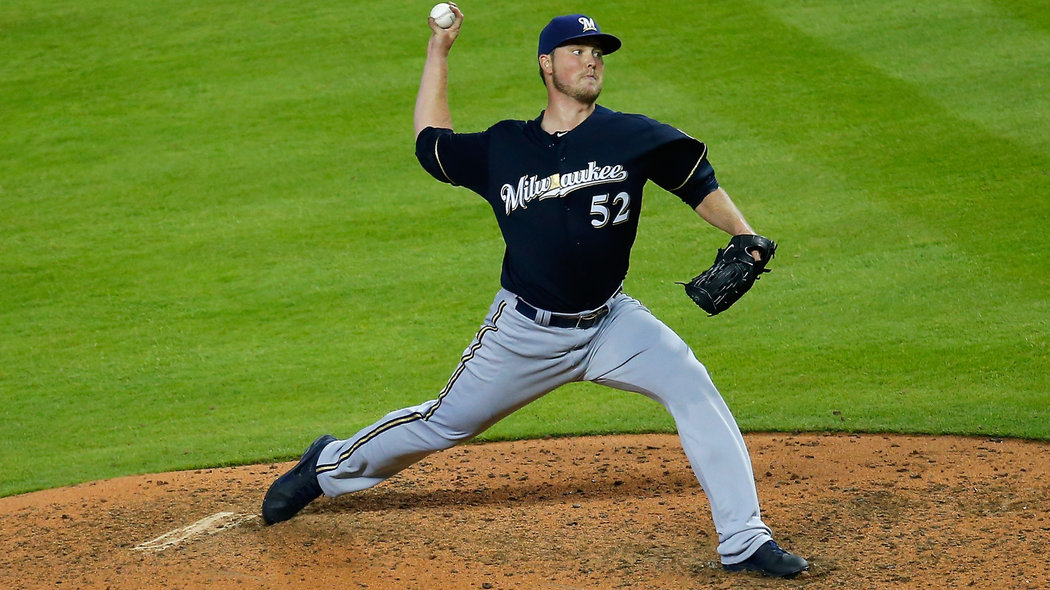 Brewers fans have long been waiting for all three of these events to occur. Brewers kill three birds with one stone.

Adam Wainwright is ridiculous. I don't even want to talk about how good he is. He's leading baseball with a 1.79 ERA. Really don't need to know more than that.

Of note for the Brewers: This was originally slated to be Marco Estrada's start, however the Brewers opted to move him to the bullpen and call-up Jimmy Nelson. It's important that we have realistic expectations for him and understand that it's very unlikely he pitches quite as well as he has for Nashville. MLB is a big step up. That's not to say he can be good. I expect we'll grow rather fond of him over the few (6+?) years. With regards to this individual start, it could help that they Cardinals have never faced him before.

The Brewers just got swept by the Phillies and that really stings. Even so, I'm still not overly concerned about the team as a whole. I think Estrada to the pen and Nelson to the rotation is a positive step, but lately it's the offense that's been lagging behind the pitching. I'm quite certain that'll pick up again though I do really hope they upgrade the bench and perhaps even a spot in the bullpen, but that's another conversation.

Point is, I think the Brewers can have a good series against the Cardinals. Yeah they have to face Wainwright, but the other two pitchers are not any kind of godly. I'm not sure what the end results are going to be, but I'm hopeful they'll favor the Brewers. They aren't going to be in this recent funk for the whole season after all. Even if the Brewers just take one game out of this series they'll go into the All-Star break alone atop the NL Central. That's not nothing. In fact, that's a whole lot of something good.