Today in Confirmation Bias: A Predictable Outcome in Toronto

Because the things your brain tells you is true is sometimes super true.

Share All sharing options for: Today in Confirmation Bias: A Predictable Outcome in Toronto

Confirmation bias - "a tendency of people to favor information that confirms their beliefs or hypotheses. People display this bias when they gather or remember information selectively, or when they interpret it in a biased way." (Wikipedia)

It's rare when bias is validated in a positive way - "Ryan Braun always comes through in the clutch," or "The Brewers always get a Badger Mutual Insurance run just when they need it." This is partly because of decades of losing entrenching pessimism, and because it makes being pissed off much more tolerable when you can say "I called that!"

Therefore, the Brewers' unforeseen success in 2014 has been incongruous with our instinctual negativity. But no baseball season lacks a little adversity, and the Brewers just had a little slipup north of the border. Because of the ice, you know? Canada. Slipped. And when you slip, you inevitably bang your head on all your preconceived biases on the way down.

Maxim: Cut Brewers who should have made the roster out of spring training always come back to bite them.

The steam behind the why-did-they-cut-Francisco movement has dissipated a bit during his crash back down to earth after a hot start with the Jays. However, hindsight is the best evidence, and while Overbay hasn't been great, he hasn't been nearly as abysmal offensively as I expected (.239/.324/.342 - I have really low standards). Still, Overbay can only offer a halfway decent PA and an ability to play one position.

And now that the non-waiver trade deadline is approaching, one proposed need seems to be for some left-handed pop off the bench who can fill in on the corners and platoon with Mark Reynolds. Basically, a slightly more positionally flexible version of Lyle Overbay.

But that ship sailed a few months ago. In fact, the Brewers untied the rope and let the current take it out to sea. I can't wait to hear the Brewers' decision makers dance around the questions about regret for cutting Francisco from the relentless local media on account of the Brewers' need for bench help.

Right. I'm not holding my breath either.

Maxim: Pitching from behind in the count is dangerous.

Especially against a team that is constantly in gear to hit dingers.

First, Bautista waited out Peralta and grooved a 3-1 fastball in the first inning for his second no-doubt homer of the series:

Later on, Brandon Kintzler appeared to be working around Edwin Encarnacion in a definite don't-allow-a-home-run situation in the 9th inning. After 4 pitches of mildly blunt passivity, Kintzler/Maldonado decided to tempt Encarnacion and perhaps get back in the count. Hey, maybe I'll spike a slider and see if he bites.

He didn't spike it. It hung, and Encarnacion didn't miss it.

Sometimes I wonder how Ron Roenicke ever got a job with the Brewers in the first place. Heck, I don't know how he manages to remain employed with any semi-professional enterprise. Not only must he be tolerated over the course of a grueling 162-game season by fellow coaches and players, he must be the figurehead and emotional representative of the entire organization.

If I had to sum up Ron Roenicke's personality in one word, it would be this: arrogant. Listen to any of his interviews or watch any of his interactions with players - he is downright mean. Of all the things to dislike about Roenicke - the bunting obsession, occasional questionable bullpen management, or lineup construction - his cold personality, bloated ego, and short temper surely takes the cake. Just look at his face. 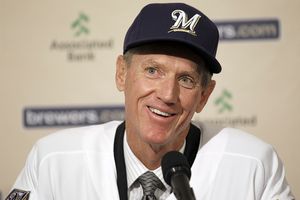 Every interaction with Roenicke is a test of patience. Each is worse than the last. He's such a jerk, he proudly disobeys the clear peer-approved rules of the game on a nightly basis.

It's no wonder Phil Cuzzi tossed him from today's game for no apparent reason. Cuzzi probably has a definite reason for the quick trigger, but I don't need to hear it. I would have done the same regardless of the circumstances. Cuzzi is a professional; a true scholar and gentleman. He does not deserve Roenicke's naturally emanating snark.

Maxim: When every .gif from an article adds up to about 1,300 feet of home runs off of your team's pitchers, they probably lost.

If you have any maxims in mind, post in the comments and I'll add them to the master list. So I can selectively choose them when they become relevant - for further virtuous analysis.