Brewers Minor League Report: Who's Hot and Who's Not, June 2014

Updates on players from every level of the minors.

Share All sharing options for: Brewers Minor League Report: Who's Hot and Who's Not, June 2014

With the 2014 first-year player draft in the books and the Pioneer League, rookie-level Arizona League and Dominican Summer League each in full swing, there were plenty of noteworthy performances at each level of the system in June.

Let's take a look at some of those players, as well as a few who didn't do so well in the first full month of action across each step of the minors.

Though it was the first month of the season in which Nelson's WHIP elevated above 1.00, it was once again an impressive 30-some-odd days for the recently turned 25-year-old righty. Two things that have me most encouraged moving forward: His 2.41 ground-ball-to-fly-out ratio and 3.60 strikeout-to-walk ratio -- both products of his mid-90s two-seamer and continually improving changeup. Both marks were monthly bests in June.

Jimmy Nelson w/ 4 scoreless and 6 Ks so far for the @nashvillesounds, and he hit 99 mph a moment ago. #Brewers

Nevermind that Lopez's K/9 ratio has decreased by roughly a batter and a half with each passing month  -- it was 5.4 in June -- the 21-year-old right hander issued just five walks over 30 innings of work and produced oodles of soft contact (2.50 ground-out-to-air-out ratio), raising his season ground ball rate to an impressive 55.1% -- eighth-highest among all advanced-A prospects.

The kid who maxed at 93 MPH with nice movement when I saw him in Cedar Rapids in late May was impressive in June, producing swings-and-misses at a 12% clip and holding batters to a 11% line-drive rate -- a big reason why opponents managed just a .213 BABIP against him. That number will surely increase over time, but it seems as though the 22-year-old has the Midwest League figured out for the time being.

Don't let the 3.38 ERA fool you -- Williams was as good as advertised in the somewhat limited amount of playing time he managed to accumulate in June. The 19-year-old righty held opponents home-run-less in an offense-happy Pioneer League, a product of the fact that he's keeping the ball out of the air (22% fly-ball rate) to begin with. How well he develops those secondary offerings will tell us a lot moving forward.

The 20-year-old Dominican Republic native logged only 14 innings between the rotation and 'pen in June, but they were productive ones nonetheless. Striking out 10, issuing just one walk and inducing ground balls at an nice 68.9% clip, Gomez's fourth official season in the system has started off on the right foot. Now, can he keep the walks down? If so, he's a name worth keeping an eye out for.

Another kid who's had his own control issues -- he walked 38 over 34.2 innings of work in the Dominican Summer League last season -- Leal has 22 punchies (that's slang for 'strikeouts' in the Jimmy Nelson dictionary) and just 9 walks to his credit over four starts (20 IP) to start his 2014 DSL campaign, which is encouraging. Want to know what else is encouraging? His 6-foot-4, 170-pound frame. Most 18-year-olds aren't built like that. Clearly, the physical projection is there, but I'll need some reports on his delivery and arm action before calling him a legit prospect at this point.

Zarraga, a former 44th-round selection back in 2007, accumulated roughly half of the total plate appearances that some of the other players mentioned in here did this past month, but boy did he make the most of them. The 6-foot-0, 248-pound catcher/DH struck out twice over 59 trips to the plate and walked nine times. It should be interesting to see if those numbers continue in the Pacific Coast League. 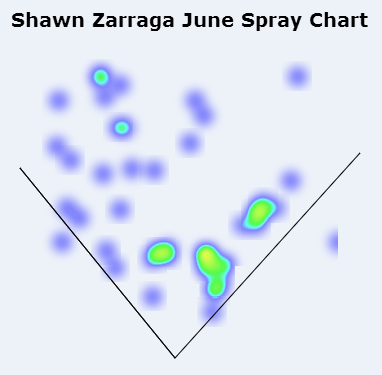 After posting a 0.5 BB/K ratio from April through May, the athletic Davis couldn't have been much more disciplined in June, walking 21 times and striking out on 15 occasions. As much as we'd all love to see his slugging percentage increase just a hair more, it's difficult to get impatient with a guy who's reaching base in nearly half of his plate appearances, which is exactly that Davis did this last month. 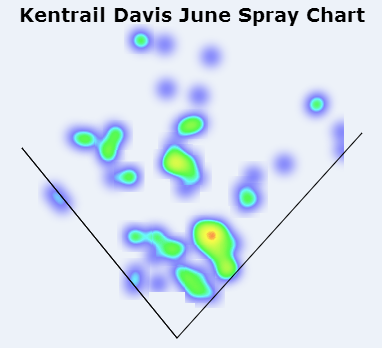 Arcia's 2014 slash line was almost identical to that of his 2013 campaign in the Midwest League up until about two weeks ago, when the 19-year-old's bat exploded to post a 1.004 OPS over his final 14 games of June -- raising his season wOBA to .342 a year after it was .303 last season with low-A Wisconsin. His plate discipline numbers have diminished slightly over time this season, as well, meaning Arcia could now be employing a much more aggressive approach at the plate. Whatever the case, it was an impressive month for the system's recently named Player of the Month for June. 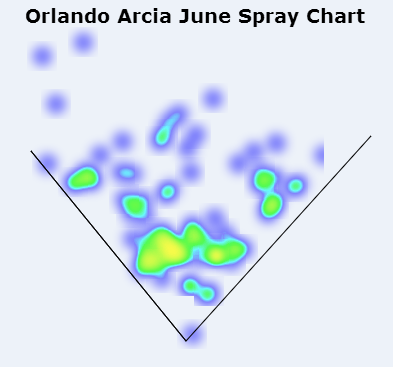 Plate discipline had been an issue for the Rice product earlier this season, posting a BB/K ratio from April through May of .32, but June revealed a much more refined Ratterree in the batter's box, yielding a ratio of roughly 0.5. His OBP and SLG% has been on the rise with each passing month, too, which is obviously encouraging for a guy who destroyed Pioneer League pitching last season. Keep an eye out for him. 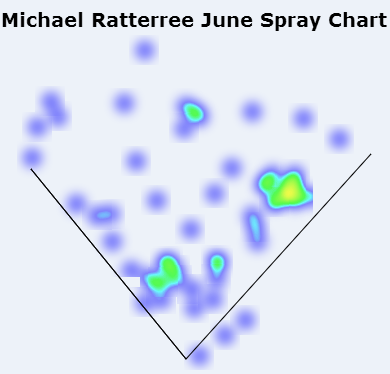 Milwaukee's eighth-round pick in the amateur draft last month, the burly 6-foot-3, 200-pound DeMuth's days in the Pioneer League are almost assuredly over soon. He showcased a good approach at the plate last month with ability to produce hard, line-drive contact -- two things that helped him post a career slash line of .344/.406/.461 over his four seasons at Indiana. 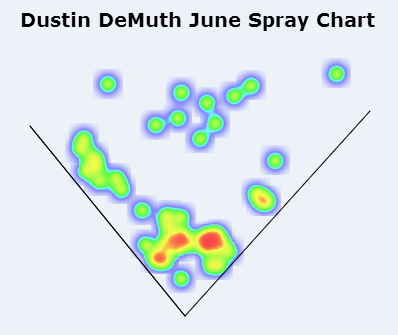 While fellow top-of-the-draft pick Jacob Gatewood has scuffled some to begin his pro career, Harrison has done quite the opposite, walking (8) nearly as often as he struck out (10) in June and stealing a handful of bases along the way. Here's a look at his quick bat at a Perfect Game showcase last year. 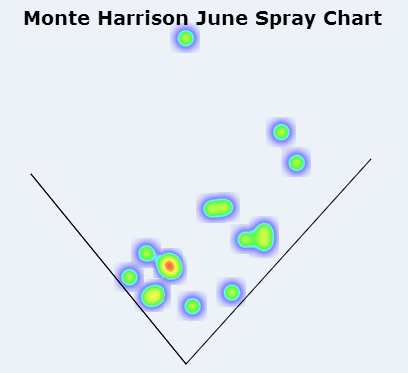 Martinez, a 5-foot-10 catcher/first baseman who's now in his third season in the system (all in the DSL), flashed a scorching-hot bat (.410 BABIP), drew a few walks and an ability to steal bases in June. He still has yet to clear a fence in his professional career -- 0 HR over 356 career PAs -- but his gap power at least seems to be coming around this year after two seasons of almost exclusively hitting singles. He currently ranks eighth among DSL catchers with a 136 wRC+. 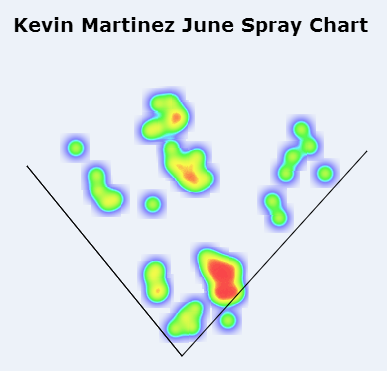 Holding batters to a .194 batting average and .311 slugging percentage over a month's time is somewhat impressive. But issuing more walks (20) than strikeouts (19) over that same span is not, especially for a 25-year-old at the triple-A level with eight seasons of professional ball under his belt. He needs to find the strike zone. Now.

For as enamored I am with the 60% ground ball rate Bradley posted over his first month at the double-A level, the control issues are equally if not more discouraging. This is to be expected, as the jump from high-A to double-A ball is the single-most challenging for pitchers, but then again, he is 24 years of age and was supposed to be a near finished product at the 2011 draft. You can't allow batters to reach base at a 40.3% clip against you (as they did in June) and expect to be successful. It just can't happen.

Who's Not: Position Players

I was high on Gatewood prior to the draft, and a few strikeouts over the month of June -- 15 over 40 plate appearances, to be exact -- aren't going to change my overall opinion of him. Indeed, there are some holes to his swing and some undesirable traits to his offensive approach that will need shoring up, but he's 18 years old and has all the raw talent you look for from a high draft pick. Also, he's an athletic 6-foot-5. You can't teach that. 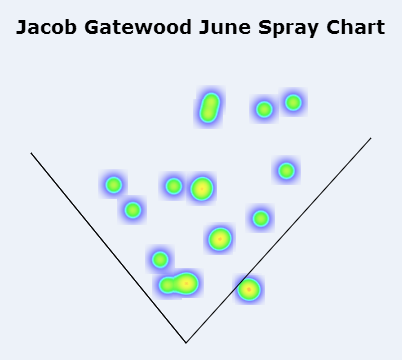 OF Victor Roache, A+ Brevard County

What is there to say, really? After a month of May in which he pounded the ball to the tune of a .275 isolated power, Roache managed just a .075 ISO to go with a strikeout rate of 31.8% in 90 June plate appearances. If this level of production perpetuates, he'll be in the Florida State League for a very, very long time. At the top of Roache's agenda: Shorten up and make more consistent barrel contact. Once he accomplishes that, the power should come. 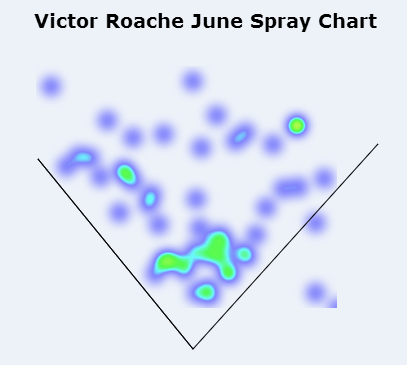