MLB All Star Game 2014: Kyle Lohse could still be an All Star for Brewers

Though Kyle Lohse was not on the initial NL roster for the 2014 MLB All Star Game, he could still be named a replacement .

Share All sharing options for: MLB All Star Game 2014: Kyle Lohse could still be an All Star for Brewers

Yesterday, the Brewers had four players elected to the 2014 National League All Star roster: Jonathan Lucroy, Aramis Ramirez, Carlos Gomez and Francisco Rodriguez. However, there is still a chance they will have one more player make an appearance during the game. 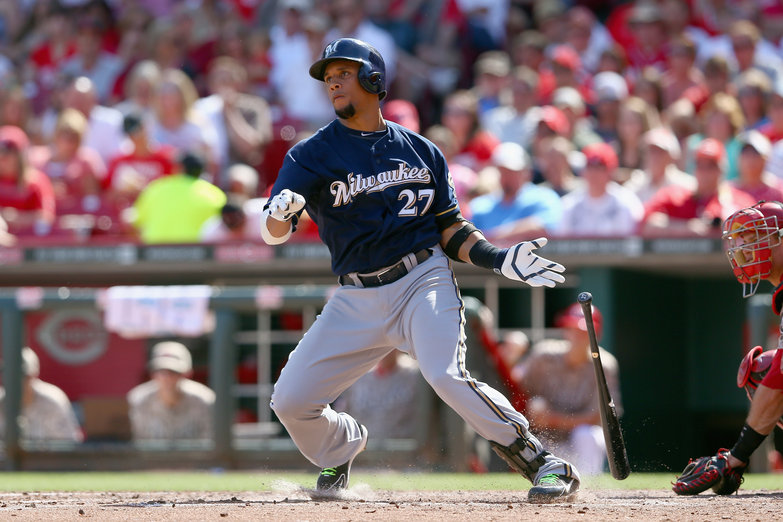 Even if Kyle Lohse is not named a replacement on the NL All Star roster, the Brewers are well-represented

It won't be through the final vote. The five players on the ballot this year are all offensive players, with no Brewers among them as Ryan Braun will miss his first All Star game in a non-suspension shortened season since his rookie year in 2007.

Instead, Milwaukee could have another pitcher on the roster as some players named to the team either drop out due to injury or end up pitching too close to the game and can't go on short rest. The most likely replacement on the Brewers? Kyle Lohse, who has a 3.18 ERA and 1.10 WHIP with 87 strikeouts over 119 innings pitched thus far. He's also expected to pitch again on July 9 for the last time before the break, leaving him plenty of rest before the All Star Game.

Here are the starting pitchers on the National League roster, the last expected date they will pitch before the break, and how many days of rest that would give them before having to pitch again in the All Star Game on the 15th.

That gives us four or five pitchers who would probably not pitch in the game due to their last start coming to close to the break. Even if they wanted to, those starting on the 13th are forbidden by MLB to play in the All Star game. Of course, it might not end up actually being that many. Guys' turns in the rotation may well be moved around to facilitate them having the opportunity to pitch in the game.

Still, replacements will be needed. And Lohse is likely to be among the top choices to be selected as a backup. Here are some of the other names who could be considered as replacements:

Then there are also a handful of relievers who could be chosen instead, including, among others like Zach Duke, Jean Machi, etc:

Though there may be a few spots available, it's possible Lohse will have a tough time taking one. If Ross can't go, I could see Kennedy or Street replacing him to give the Padres an actual player able to pitch in the game. I would imagine Strasburg would be near the top due to his name recognition and nasty stuff, despite his relatively mediocre ERA.

Then, with Cardinals manager Mike Matheny choosing replacements, there's the possibility he may favor Lance Lynn or possibly another of his relievers over other team's candidates. It's also very possible he moves around his probable pitchers over the next week or so to facilitate Wainwright pitching in the game, though there are no explicit rules preventing Wainwright from pitching like there are for those scheduled to toss on the 13th.

Lohse does have two things in his favor, however. The first, of course, is the fact he plays for the best team in the National League. Being on a winning team has, right or wrong, always been a factor in decisions such as these. This time around, that will favor Lohse. Similarly, Lohse has a 9-3 record that represents one of the best records of any National League pitcher. Yes, pitcher wins and losses are a dumb stat. But they also have traditionally come into play when choosing All Stars and Cy Youngs and all that.

It's not an overwhelming likelihood, but the Brewers do have a chance for a fifth All Star. The National League will certainly need at least a couple of pitching replacements, and Lohse will probably be on the short list for one of those spots. There are other strong candidates, certainly, but Lohse has the 'winning factor' or whatever you want to call it. Unfortunately, deciding whether he will be there is not up to a fan vote. Instead, we'll have to see if Mike Matheny is willing to put another division rival on his roster.