Marco Estrada looked like a great No. 5 coming into the season. Unfortunately it hasn't worked out that way and now his time in the rotation may be over.

It's well documented that Marco Estrada has been on a historic pace for home runs allowed. While he's been okay in his last three starts, the home run issue has not abated. I've been among his staunchest defenders and even I have to admit it's probably time to move him to the bullpen. After giving up a 2 run home run last night and ultimately getting the loss to one of the worst offenses in baseball last night, the Brewers and Ron Roenicke have admited as much. Tom Haudricourt has more quotes here.

Brewers have a Top 50 prospect 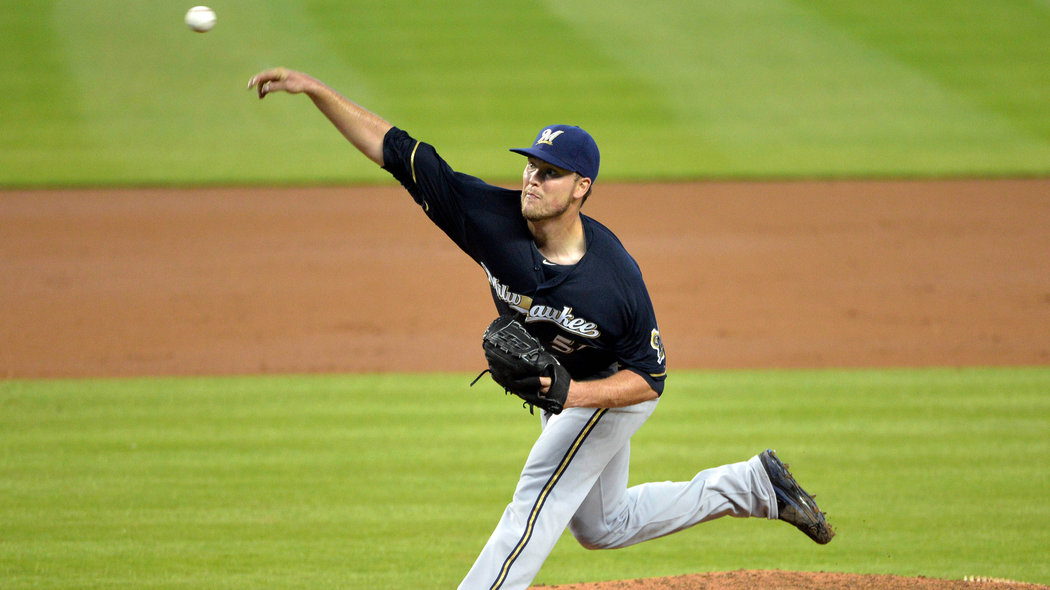 Nelson has parlayed a big year in Triple-A into a huge jump in Baseball America's prospect rankings.

I think right now it's only a matter of when the best time to slot him in is. His first opportunity would come on Saturday (his day to pitch) when Marco Estrada is set to face off against Adam Wainwright. Then he would sit until possibly July 22nd which is the 5th game after the All-Star break. Nelson was recently named the AAA-All Star game starter. The Brewers might want to let him pitch that game and then call him up afterward.

The other obstacle is figuring out what to do with Estrada and the bullpen. I hope no one wants the Brewers to outright Estrada entirely. He still has value and could potentially pitch very well out of the bullpen. Opposing batters would only face him once and his fastball would likely tick up a mile or two. The velocity separation between his fastball and other pitches could make all the difference in the world. Take a look at Wade Davis' career for an example of the difference pitching out of the pen versus rotation can make.

Jim Henderson is apparently progressing through his rehab starts more quickly than expected, while the opposite is true for Tyler Thornburg. Henderson is probably still a week or two away so that's not an immediate concern. Regardless, one reliever will have to be moved somewhere in order for Estrada to be put in the bullpen, assuming they don't go with a short bench again.

The obvious candidates are Rob Wooten and Brandon Kintzler. Each has talent, each has struggled at different times, and each has an option. That means either one can be send to Triple-A without being exposed to waivers. Of the two, I think Wooten has been more effective this year. I'm not sure what's been going on with Kintzler, but he did have an injury earlier in the season. Perhaps he could benefit from return to Nashville?

Another potential option is trading Tom Gorzelanny. This is the second time I've brought this up recently, but don't misunderstand me. I'm not trying to say he doesn't have value for this team or that he isn't good. I just think he's expendable considering he's the third real LHP in the pen. I'd be happy to keep him, but it could make sense to move him.

There is also the chance that the Brewers find someone interested in acquiring Marco Estrada himself. It sounds crazy, but he's still a cheap SP option for the back-end of a rotation. The Yankees recently traded for Brandon McCarthy who has been similarly ineffective, though he hasn't given up near as many home runs. If they find a team that believes in Estrada's xFIP (still a poor 4.29) or believes that his HR issue can be fixed or will regress, it's possible the Brewers can get something for him. Perhaps a reliever? I don't know what we might expect.

It's going to be really interesting to see what the Brewers end up doing and when exactly. I think the Brewers wait until after the All-Star break to make any move. It's possible they make some trades over the break and things work themselves out. Remember when Francisco Rodriguez was acquired all of 5 minutes after the AS game ended in 2011? Ultimately, I expect Kintzler or Wooten to get sent down and Estrada moved to the pen. I'm cool with that.