Appreciating the effect Mark Attanasio has had on the Brewers franchise

After a long dark period, the Brewers finally found light with Mark Attanasio purchasing the team. As he starts to receive nation-wide attention, let's appreciate what we as Brewers fans have.

Share All sharing options for: Appreciating the effect Mark Attanasio has had on the Brewers franchise

In 2004, the Milwaukee Brewers spent $27.5 million in player salaries. The highest paid player was Ben Sheets, who made $2.4 million that year. Only one other player -- Dan Kolb -- made over $1 million.

In September of that year, the Selig family agreed to sell the Brewers for $200 million to Mark Attanasio, a money management firm senior executive from the Bronx. In 2005, the team saw their payroll jump up $12 million. In 2006, they set a franchise record with a $57 million payroll. Less than a decade later, the 2014 smallest-market-in-baseball Brewers have eclipsed the $100 million mark in player salaries for the first time. 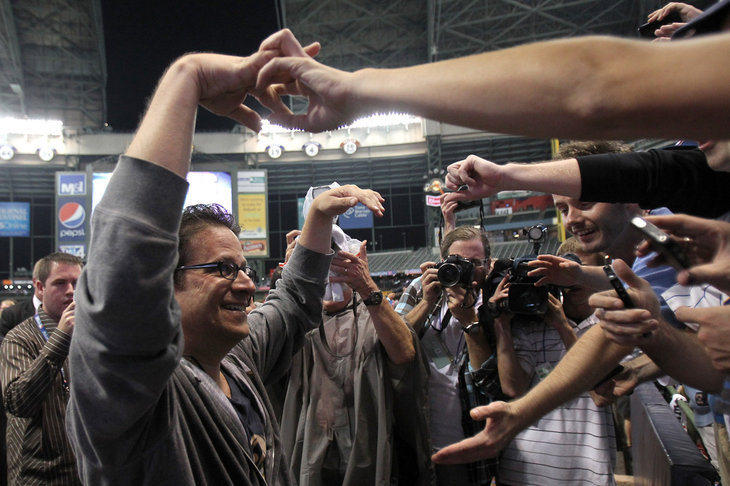 He won't get the position, but it appears Attanasio was at least under some consideration for the top spot in baseball.

Smallest market in baseball, 16th out of 30 in the MLB in payroll. And Milwaukee has been in first place for all but four days this season.

Now, Mark Attanasio is starting to draw some attention around baseball. This week, we learned that he was one of a handful of people to interview for the MLB commissioner spot. He won't get the position, but this is important. It means that he has the potential and the support to possibly move to a top-level position in baseball. Which would cause a conflict of interests and result in the Brewers losing another owner to the MLB corporate ladder.

The Selig family, especially when ol' Bud was around, had some good moments. Primarily, they brought the organization from Seattle to Milwaukee. They also saw the Brewers win the AL pennant during a successful decade in the 80s.

Then Bud became acting MLB commissioner and handed control of the team to his daughter in the early 90s. From that point on, it was only dark days with the Seligs. Twelve years of losing. In 2005, Attanasio's first as owner, the Brewers went 81-81. There was a light, finally. Something Brewers fans could look towards. Hope.

Above all else, Mark Attanasio brought a willingness to win to Milwaukee. He didn't purchase the team purely to make a profit. He's no Jeffrey Loria. He wants the team to succeed. So much so, that he's willing to go 'deep into the red' financially when he knows the team can win.

Attanasio and co signed Ben Sheets to the largest contract in team history in 2005. They signed Jeff Suppan to the biggest free agent deal in team history because they thought he would help win. They signed Ryan Braun to the first $100+ million contract in franchise history in an effort to make him the first player since Robin Yount to be a true star that spent a long time in Milwaukee. They signed Matt Garza, they signed Kyle Lohse. Aramis Ramirez. Carlos Gomez. Rickie Weeks. Hopefully Jonathan Lucroy, soon. They spent $3.2 million on one 16-year-old in the international market a year after setting the team record twice on international spend for a player.

All of a sudden, the Brewers are a team that can be competitive and stay competitive. They'll never have the biggest checkbook in the league, but they at least have one now. They can afford to keep good players in Milwaukee rather than trade them or watch them walk in free agency. The Brewers can sign other teams' free agents to fill holes on the roster.

Mark Attanasio is the biggest reason for this. He is what the Brewers needed. At first, there was fear he might move the team. A Bronx-born Los Angeles businessman? Why would he want to stay in the midwest? Instead, he has shown a love for Milwaukee. He is a part-owner of the Admirals, he sponsors Andy Warhol exhibits at Milwaukee art museums. He's reportedly willing to help keep the Bucks in Wisconsin.

The Brewers and Brewers fans have struck absolute gold. Attanasio isn't perfect -- there are times that he can seem to force moves to win when they might not be the wisest. But even his imperfections come from a desire to make the Brewers the best they can be.

Mark Attanasio is starting to become a popular figure in baseball it seems. I hope he never leaves.