The Brewers are no longer in first place. We now have the choice to be positive or to be negative about the next month of baseball.

Share All sharing options for: Baseball is more fun when you have a positive outlook

The Brewers are in second place in the National League Central Division. It's the first time since April 4 that this is the case. That's a length of 150 days. By the sounds of some Brewers fans, you would think that the Brewers have been in their death throes since around the start of May.

I'm not going to begrudge anyone their opinions. If that's how you want to watch baseball, fine. If being pessimistic is some sort of defense mechanism, so be it. But, frankly, it seems like an all-in-all shitty way to watch sports. Why bother watching the Brewers if you're not going to enjoy yourself, or allow yourself to dream that they can win?

To me, sports are supposed to be an escape; something you can dream on a bit. You don't have anything to do with how the team is put together or managed. But you love them as if you had been the architect of them. As if it were your blood and sweat going into it every single day. We stare at the boxscores, read everything we can about the team, watch as many games as our personal lives allow. 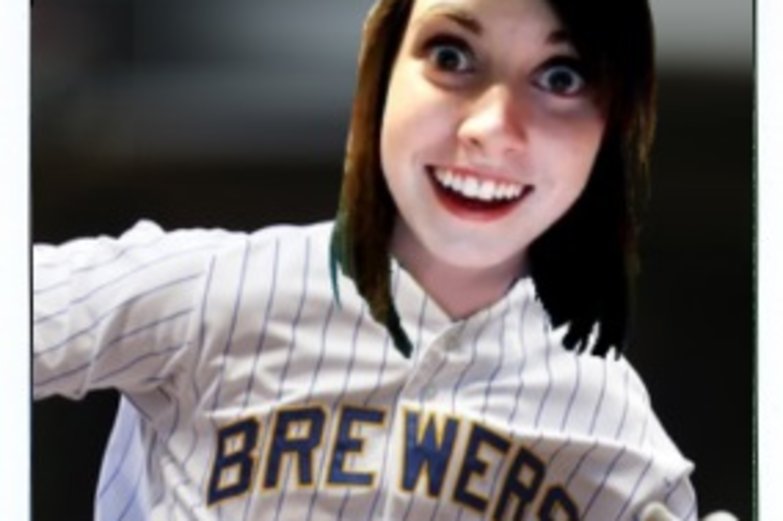 If Brewers players were embodiments of internet memes.

So why not allow ourselves to dream? Why should our default mode go to such a pessimistic outlook of the team? Clearly the Brewers are good, and talented. They were in first place for 150 days, for cripes sake. What's the point of always deferring to 'well of course they are going to lose'.

Isn't it more enjoyable to think, well, hey, the team has lost six in a row but clearly that can't keep up and they can get hot again and easily reclaim first place? Doesn't that sound preferable? There's nothing to be gained from being pessimistic, but there is for bringing a little optimism to the table.

I don't know. People who know me in real life would maybe not classify me as an optimistic person. Not that I'm a pessimistic guy, either. More I just don't tend to go in either direction. When it comes to baseball though? When it comes to the Brewers? You're damn right I think they can make the World Series.

Moods are transferrable. When you choose (and it's absolutely a choice) to be a pessimistic chicken little, people around you are going to start feeling the same way. Similarly, when you choose to look at silver linings, others will latch on to similar feelings. You do have the power to make other people -- on this blog, on Twitter, on Facebook, at the office, at home, wherever -- feel happier.

These are the 2014 Brewers, who love dingers, and wacky corkscrewing around because they swung too hard, and overaggressive baserunning, and bunts, and veteran grit, and platoons. It's also a team that seems to thrive when they are having fun. Maybe they need the fans to show that they are having fun, too.

The Brewers are a good team. They are nine games over .500 despite a six game losing streak. If you want to keep thinking the season is over, fine. But you have a choice to think otherwise. You have a choice to believe in the Brewers and have fun watching them scrap against mostly NLC foes for a division title. Or you can take your status quo doomsday attitude, grumble about how their season is over when they're a game out of first place, and pretend this whole season was just a distraction between Packers seasons.

I'm going to choose to believe in my Brewers and know that they can pull off something special. The day I forsake that attitude is the day I stop being a fan. You also have a choice to be better fans, the kind who never stop cheering their team on, or to keep pretending the Brewers have no chance. What seems better to you?