Why I hate the damned Cardinals: An essay

The Cardinals have burned the Brewers often. Here are some reasons why I do not like them.

Share All sharing options for: Why I hate the damned Cardinals: An essay

The Cardinals are my least-favorite team in baseball. There isn't another team in the league that I dislike more. Everything they do bugs me. I suspect this is also true for many Brewers fans, though some might dislike, say, the Cubs more or at least on an even-tilt.

I try to be a positive person, always looking on the bright side of things. But the Cardinals are the target of most of my frustrations. Brewers losing? Damned Cardinals! Something goes wrong at work? Cardinals are the problem! Significant other leaves me? Tony La Russa got to them.

Catch my drift? Here is a detailed reasoning of why I hate the Cardinals, which sometimes I feel bad about because the guys over at Viva El Birdos seem pretty great actually (stop being good people and let me hate you) and....ehhh, I don't really feel bad.

One thing I will genuinely never-ever forgive the Cardinals for is their immense hatred of the Brewers' untucking of jerseys after wins in 2008 and 2009. Our untucked heroes were a fun, young lineup that would remove their jerseys from the confines of their pants after wins out of respect for blue collar workers that are ubiquitous in Milwaukee. The celebration stemmed from outfielder Mike Cameron and his father, who would untuck when he got home after a long days work.

Now, OK, so this is the kind of thing where I think people get too serious about sports and forget what they are great for. Sports are, in the end, entertainment. They're an escape from Real Life. They allow us to root for something outside of us, and they are meant for us to enjoy them. There's a reason why I hate The Unwritten Rules -- half of them seem based around keeping the sport as dull as possible while the rest are about hitting batters for perceived slights.

You want young people to watch the game? Let it be fun and don't let stodgy teams muck it up. That's baseball's biggest problem, in my opinion. Yasiel Puig and Bryce Harper and Carlos Gomez are talked about as immoral examples rather than as fun, young, dynamic stars. Flipping a bat is not the same as flipping the bird, dammit.

Let teams untuck their shirts and do beast mode. It's fun and lighthearted and oh my god not hurting you in any way. No we're not cheating using ribbon boards, you weirdos.

I was talking to a dude at the bar the other day. He pointed out that the last time an NL team other than the Cardinals or Giants made the World Series was 2009, when the Phillies represented the league. The Cardinals have been to the World Series four times in the past ten years. The Cardinals haven't had a losing season since 2007. That's their only losing season since the turn of the millennium. Since 2000, they have a 1,351-1,056 record, a .561 winning percentage.

The Cardinals have the second most World Series appearances of any team in baseball and have been to the postseason in four of the last five years.

The Brewers have one World Series appearance. Back in 1982. When the Cardinals beat them. 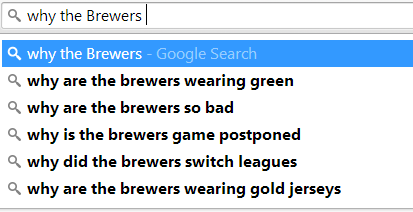 Starting pitcher goes down? They call up someone who pitches eight shutout innings. Somebody you've probably never heard of, probably. None of their prospects fail. None of them. Mediocre prospects become stars. Guys who are supposed to be out for two months come back in three weeks. Albert Pujols breaks an arm and gets a leg torn off in a freak needle-point accident and is back on the field two days later and cranking a pair of home runs.

They keep winning against the Brewers

And that only covers the years since the Brewers got good again. Only once has Milwaukee convincingly beat the Cardinals in a season series. And that was six years ago.

This is not an exhaustive list. There are more. But, man, I just really want to beat the Cardinals.