The Brewers hold a club option on Gallardo for 2015. It seemed a given he'd be returning, but a recent rumor has but that in question.

Share All sharing options for: The Brewers are reportedly on the fence about bringing Gallardo back in 2015

Yovani Gallardo (along with Ryan Braun) is set to become the longest tenured Brewers player next year (assuming Rickie Weeks is not brought back). The Brewers own a club option on Gallardo for next year at $13 million with a $600,000 buyout. After struggling last year, Gallardo has bounced back nicely this year and so it seemed to me a guarantee the Brewers would exercise that option. Nick Cafardo of the Boston Globe suggests that may not be the case.

Very specifically, Cafardo says, with regards to exercising Gallardo's option, "there's some pushback by some in the organization, feeling the Brewers might be better off spending the money elsewhere." That's very interesting and it brings up a multitude of questions the chief among them being: If the money is better spent elsewhere, where exactly is it better spent? Through process of elimination we can probably assume the only areas that could stand from improvement (requiring a salary commitment around or above $13 million) are third base, first base, and the rotation itself.

At third base the Brewers currently have Aramis Ramirez. He's performed adequately this year, though his age is starting to show. To date this season he's slashed 297/341/444 which is good for a 117 wRC+. The troubling trend is his disappearing power. That SLG would be his lowest mark outside the aberration that was his 2002 season. His 14 HR would be his lowest mark as well, but there are 19 games left to add to that. Assuming he performs exactly the same next year, that's not exactly what you want for $14 million (the cost of his mutual option). At age 37 it's not irresponsible to suggest a decrease in production is likely. So yeah, the Brewers might be better off spending money on a different third baseman.

The options aren't terribly appealing though. Realistic upgrades include Hanley Ramirez, Chase Headley, and Pablo Sandoval. You could also throw in Asdrubal Cabrera and Korean import Jeong Choi. Each of these players comes with a lot of risk and would require a solid commitment in both dollars and years. You can probably eliminate Hanley Ramirez from the conversation for cost reasons. Sandoval may also be too expensive. That leaves Headley as the only true third baseman and he hasn't exactly been good recently. Also, one must realize there is actually a lot of value in the one year commitment it takes to bring back Ramirez, even if the Brewers technically overpay for that one year. (Which brings up a secondary point: If they were to replace Ramirez, they'd have the money they don't spend on him to do making the money they'd spend on Gallardo largely superfluous)

The free agent options at first base are almost nonexistent. For the sake of argument we'll assume Mark Reynolds is out of the running. If Adam Lind and Billy Butler's team options are picked up, the only realistic option seems to be 33 year old Michael Morse (280/338/477, 16 HR, 134 wRC+). I'm not sure that's the type of upgrade the Brewers would be hoping for if they're going to punt the chance at 30+ starts of 3.50 ERA from Gallardo.

There is also the chance the Brewers decide to go with a platoon of Jason Rogers and Matt Clark. It would be a platoon in the fashion of Mark Reynolds and Lyle Overbay (one RHH 1B/3B, one LHH 1B only). They would both make a total of $1 million (league min x 2). So the upgrade at first would not only have to be worth more than the value Gallardo would provide, but also be more valuable than what the Brewers think they could get out of Rogers/Clark for super cheap.

Finally, let's talk about the rotation. Obviously, if the Brewers are letting Gallardo walk (or trading him) they're going to have to replace him. Before I talk about free agents, I have to address Mike Fiers. I know. A surprising number of you are screaming right now that of course they'll just replace Gallardo with Mike Fiers. He has a 2.03 ERA for cripes sake!!! Well yeah, but you forgot about the second half of 2012 didn't you?

Why I hate the damned Cardinals 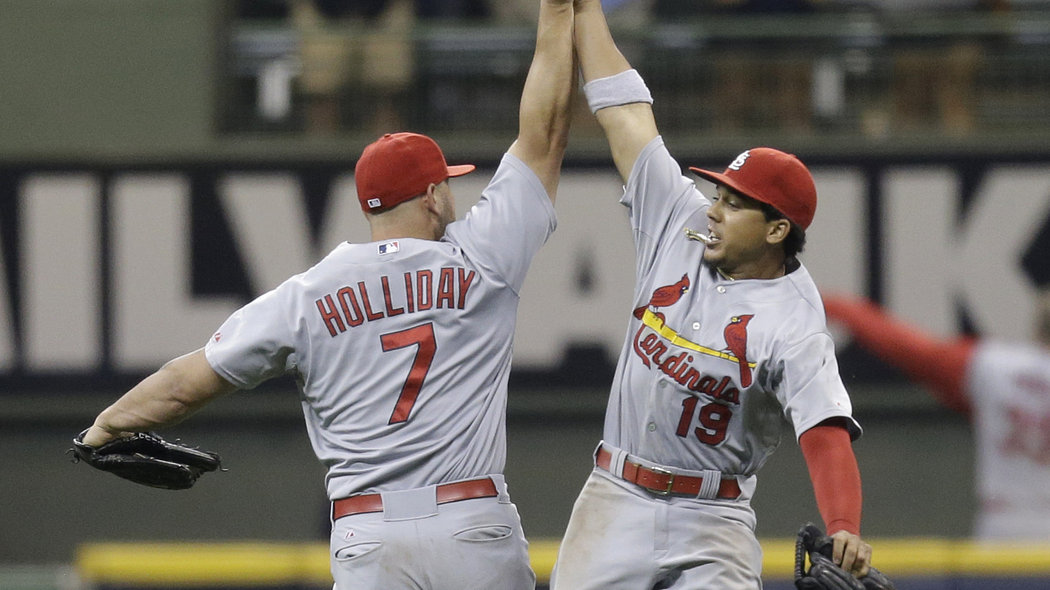 The Cardinals have burned the Brewers often. Here are some reasons why I do not like them.

Hold on. I know you're like, super angry right now. I'm not suggesting Mike Fiers secretly sucks. I actually think if anything, his success this year suggests he's capable of maintaining across a full season. I'm just pointing out that when Mike Fiers is off, he gets hit hard. It makes sense. He has a fringe fastball that plays up thanks to really good deception and really good control. If either of those things is off he's current era Brad Penny. So, at the very least, we don't know what is fair to expect out of him for 33 starts.

It's hard to put together a contender when you have Jekyll and Hyde as your fifth starter, but my objection to simply replacing Gallardo with Fiers goes deeper than that. Here was the rotational depth chart going into this season: Lohse-Garza-Gallardo-Peralta-Estrada-Nelson-Thornburg-Smith-Gorzelanny-Fiers (remember, Fiers had fallen off the radar after a poor 2013 mired by a broken arm). Marco Estrada is almost certainly gone after this year. Tom Gorzelanny too. Tyler Thornburg is questionable to pitch at all right now due to his unknown injury. Then we're also eliminating Gallardo. Do that and simply replace him with Fiers and next year's depth chart is: Lohse-Garza-Peralta-Nelson-Fiers-Smith. You could theoretically throw Taylor Jungmann into the mix, but you're taking on a lot of risk on a prospect who struggled in his first exposure to AAA. Basically, the rotational depth would be seriously compromised.

It's for those reasons I think if the Brewers don't bring Gallardo back next year it'll be so that they can bring in a new starter. They're not going to trade Gallardo for another starter because that wouldn't make sense, so back to free agency we go. After the acquisitions of Kyle Lohse and Matt Garza, I've begun to trust the Brewers when they make these types of free agent deals. Looking at the free agent list, I see 3 potential upgrades/potential targets: James Shields, Ervin Santana, and Brandon McCarthy.

Max Scherzer and Jon Lester figure to be the big SP targets for most clubs. In my estimation, James Shields would be third on the list. While Lester and Scherzer are both definitely out of the Brewers price range, James Shields just might fit. Shields has been a very good pitcher, but he is getting older and his skills have diminished somewhat. That being said, I do think he could provide more value than Gallardo on a purely performance level. He'll be 33 next year and so he won't be able to sign for a 5-7 year deal. Also, he's seen as unlikely to re-sign with the Royals who will certainly extend him a qualifying offer. Both of those factors in tandem may work to suppress his value in a way similar to what Lohse and Garza experienced. Even then, he'll certainly command a higher AAV than either of those pitchers. I'm guessing, but I think he'll sign for a few million less than $20 million AAV. It's possible the Brewers could defer a certain amount per year, as they have with several recent FA acquisitions, so that they're not paying him much more than the $13M they'd owe Gallardo next year.

Ervin Santana ranks a good deal lower on the list than Shields, but he could be solid too. Since moving to the NL he's seen his strike out rate jump back up, near a career high. He's also really only had 1 bad year since 2010. Since 2008 he's failed to throw 200 innings only twice. That ability is often overlooked but pitching deep into games can have a positive impact on a team's bullpen which is meaningful. The problem with Santana has always been the home run. It's been fine this year, but he's pitching in Turner Field and a move to Miller Park would likely not help his numbers. In addition to that it's possible, if not likely, the Braves also extend him a qualifying offer. The Brewers would be risking the draft pick in the hopes that his K% increase is real and that his HR/9 won't explode in Milwaukee.

Brandon McCarthy is a high risk/high reward pitcher. He was pretty terrible in Arizona, but there were mitigating factors. The dry air helps to inflate offensive numbers and more importantly the Diamondbacks forced him to stop throwing his cutter. When he was traded to the Yankees they allowed and actually encouraged him to reincorporate the pitch. So far it seems to have worked as his numbers are way better in New York. The main issue with McCarthy is his injury history. This season is the first time in his career he's pitched over 170 innings. In point of fact, he'll likely get around 200 innings in this year. If he's capable of recreating those innings going forward and he pitches like he has in NY (which is what his FIP/xFIP indicated he would) then he could provide great value. The key word being "IF."

Anyway, that's my opinion on what might happen if the Brewers do decide to move on from Gallardo. Honestly though, my real opinion is that they do exercise his option. Over recent years (2013 being the exception) he's provided pretty consistent mid-3.00 ERA value which isn't great, but is better than average. In free agency $13 million AAV is pretty close to what you pay for that level of production (look at Garza's contract). Only with Gallardo it comes with only a 1 year commitment. As I said before regarding Ramirez's option, having only to commit to 1 year is valuable in and of itself. Things will become clearer in the coming months, but for now I'm treating this as nothing but an interesting "What if?" scenario.