So much for that closed door meeting: Marlins 6, Brewers 4

There have been bad games before. Ones we thought could get any worse. The Brewers got deftly handled by the Marlins with Brad Penny on the mound. This. This was the worst game of the year.

Share All sharing options for: So much for that closed door meeting: Marlins 6, Brewers 4

In his last start Yovani Gallardo tied Ben Sheets for the franchise strike out record. He would not get the record in the first inning. He would however give up a run. Christian Yelich singled, advanced to second on a fielder's choice, and then scored on a line drive off the bat of Casey McGehee (who would then be thrown out advancing to second to end the inning).

Tonight marked the first night back for Carlos Gomez who returned to the leadoff spot. He showed spectacular patience drawing a walk and sensational speed going all the way from first to home plate on a line drive double by Scooter Gennett to tie the game up immediately after going down a run early. A wild pitch would then send Gennett to third base. The Brewers would take a 2-1 lead on a ground out by Jonathan Lucroy. Aramis Ramirez and Ryan Braun would follow suit with back to back weak ground outs to end the inning.

Brewers on the fence about bringing Gallardo back in 2015 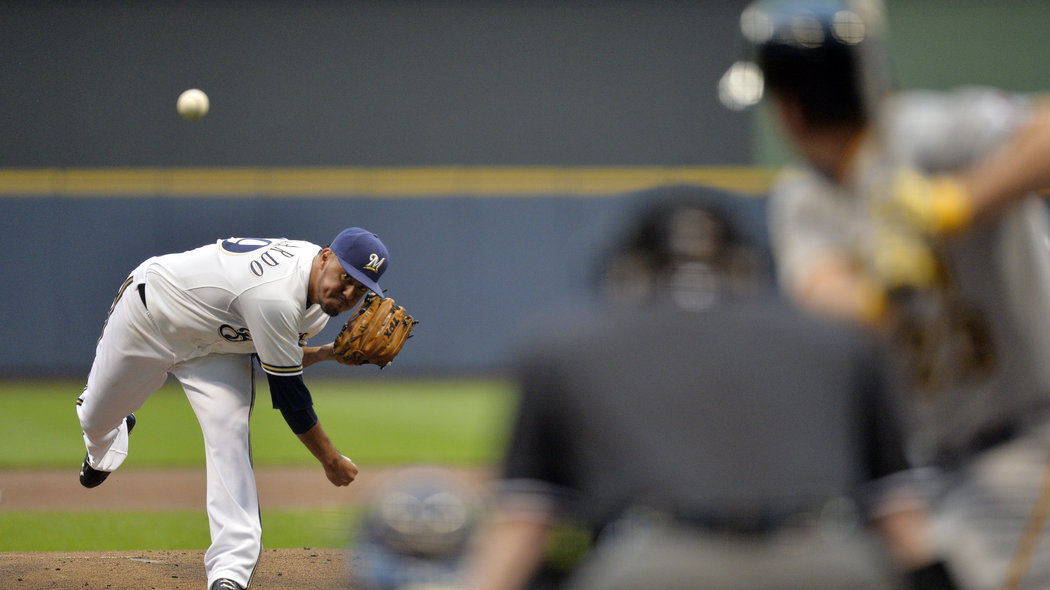 The Brewers hold a club option on Gallardo for 2015. It seemed a given he'd be returning, but a recent rumor has but that in question.

Gallardo would immediately relinquish that lead by giving up back to back home runs to Marcell Ozuna and Garret Jones. Gallardo then struck out Jarrod Saltalamacchia to set a new franchise record. The Marlins still got to keep their one run lead so you'll forgive me if I didn't celebrate. Adeiny Hechavarria lined a single and advanced on a bunt by Penny. Christian Yelich would drive in the Marlins 4th run with his second line drive single of the night. Gallardo would finally induce a grounder to end the inning but the Marlins would walk away with a 4-2 lead after all of 1.5 innings.

Khris Davis would lead off the Brewers half of the second inning with a walk. Mark Reynolds would erase Davis with a double play. Jean Segura showed some signs of life with a line drive single after falling back 0-2 in the count. It wouldn't matter though as Gallardo grounded out to end the inning.

Yovani Gallardo would keep things rolling with a leadoff home run by Giancarlo Stanton. McGehee almost lined a double but Carlos Gomez was able to track it down for the first out. An error by Aramis Ramirez allowed Ozuna to reach. Gerret Jones drove in Ozuna with a line drive double. Ozuna advanced to third on a fly out but he'd stay put after Hechavarria grounded out to end the inning.

In the bottom of the third inning Brad Penny retired the side in order with 2 weakly hit fly outs and a weakly hit ground out.

Gallardo put the exclamation point on his horrible start when he gave up a line drive single to Brad Penny. A fielder's choice erased Penny and the second out followed with a fly out. Four straight balls to Stanton would put runners at first and second for Casey McGehee who would then load the bases with a walk of his own. Yovani Gallardo's night ended there. But hey, franchise record or something. Marco Estrada came in and retired Marcell Ozuna with a strike out to end the inning without the Marlins being able to add to their lead.

The Brewers didn't do a whole lot in the fourth inning. Aramis Ramirez drew a walk, but was erased when Ryan Braun grounded to the short stop yet again. Then Khris Davis capped things off by grounding into a double play. I remind you, Brad Penny was pitching.

In the top of the fifth Marco Estrada retired the Marlins in order.

In the bottom of the order Brad Penny retired the Brewers in order. B-R-A-D P-E-N-N-Y.

Marco Estrada retired the Marlins in order in the sixth as well. This inning was highlighted by a superb diving catchin lefty by Khris Davis.

The Brewers finally got another base runner. In the bottom of the sixth with one out, Gennett grounded up the middle for a single. Another single by Lucroy would put runners at first and second for Aramis Ramirez who very promptly grounded into an inning ending double play on the very first pitch from BRAD FREAKING PENNY.

Marco Estrada retired the first two batters in the top of the seventh (including issuing a strike out to Stanton) before allowing a single to Ozuna. It was the first base runner he allowed. He retired the next batter with a fly out.

In the bottom half of the seventh, Sam Dyson retired the Brewers in order.

With a pop out by Saltalamacchia for the first out in the eighth inning, Estrada matched Gallardo's innings total for this game. A fortunate liner to Mark Reynolds would result in an inning ending double play giving Estrada 4.1 IP on the night, with just 2 hits, no walks, and no runs. That was a good deal better than the 6 runs in 3.2 IP by Gallardo.

In a game where not a lot of good things happened, I took a lot of joy in watching Jean Segura draw a lead off walk in the bottom of the eighth inning off AJ Ramos. So maybe that's why it was so very disheartening when Gerardo Parra pinch hit for  Estrada only to ground into an out. Segura did advance however. Then Carlos Gomez uplifted my spirit again when he drove in Segura with a double up the left field line. Gennett would sky one for an out allowing Gomez to advance to third for Jonathan Lucroy who would drive him in by beating out an infield single. Bryan Morris took over and retired Aramis Ramirez on a grounder. It was close though. Lucroy actually beat out the throw to second, but Ramirez wasn't so lucky with the relay to first.

Jonathan Broxton took over in the ninth for the Brewers. He struck out Yelich, got Donovan Solano to ground out, and Stanton to fly out. It's been interesting to monitor Broxton's velocity in the few outings he's had as a Brewer.

In need of a miracle, the Brewers led off the inning with Ryan Braun who had yet to reach base. He struck out looking on 3 pitches. Khris Davis hit a ball that just happened to find Steve Chisek's glove. Seriously, normally it'd have gone into center for a single, but instead Chisek blindly grabbed behind his back and somehow got the ball. It was pretty brutal. Then Lyle Overbay grounded out on one pitch to end the game.

By the way, this game is the perfect example of how "leadership" or whatever you want to call it isn't a real thing. Or at the very least the impact is negligible. The Brewers just had their "Major League"-Turning Point-Montage-Players Only Meeting and look what happened. They got decimated by one of the worst starters going in baseball right now with a mediocre offense behind him.