Rodriguez is a very good pitcher. He is not a good person and for that reason I do not want him on the team I root for.

Share All sharing options for: Francisco Rodriguez is a good pitcher whom the Brewers should not sign

Here's the news from over the last week: The Brewers -- particularly Mark Attanasio -- have been talking with Francisco Rodriguez's agent and there is heavy speculation that the team might re-sign him for at least the 2015 season.

If you know the Brewers, this probably isn't that surprising. They may have said this off-season that they weren't planning on bringing him back, but Rodriguez always finds his way back to Milwaukee. The Brewers first acquired him in a trade with the Mets mid-2011. They then re-signed him in December after he became a free agent to a one year deal. The next off-season, after nobody else wanted him, Milwaukee signed him to another one-year deal in April. They traded him to the Orioles in July, but for the third straight year he signed with the Brewers in the winter, this time waiting until February.

Rodriguez has had multiple incidents off the field that make him someone I would rather not cheer on. In 2010, he was arrested for assaulting his girlfriend's father, allegedly because the father made a remark about Rodriguez's mother. He was charged with third degree assault and ordered not to contact his girlfriend or her father.

Instead, Rodriguez was charged with contempt of court due to him sending numerous text messages to the father.

Then, in 2012, in Wisconsin, Rodriguez received a domestic violence charge when he allegedly hit and kicked a woman who is the mother of his child. Those charges were dropped only because she and the only eyewitness left for Venezuela and did not respond to the district attorney. That's a really short snippet to describe a very serious event. Here's what is reported to have happened:

The criminal complaint said the woman and Rodriguez had been arguing before going to bed, and he became upset and struck her on the head.

She told police her nose began to bleed after getting hit due to a history of physical abuse. The woman told police she grabbed a sweatshirt and tried to stop the bleeding, but then Rodriguez grabbed her by the hair and threw her. Once on the floor, she said Rodriguez then began kicking her and injured her left upper shoulder blade, bruised her left upper thigh and injured her left hand near her wrist, the criminal complaint said.

After the beating, she said Rodriguez dragged her to his car, the complaint said

The NFL has been under fire the past year because of domestic violence charges. Primarily, there was the Ray Rice case which has received a huge amount of attention and has gotten the NFL in a bit of hot water with how much they may have known and the punishments doled out. Then there was the Adrian Peterson situation as well, resulting in the star running back missing nearly all of the season.

Making lemonade out of the possible (inevitable?) Francisco Rodriguez signing 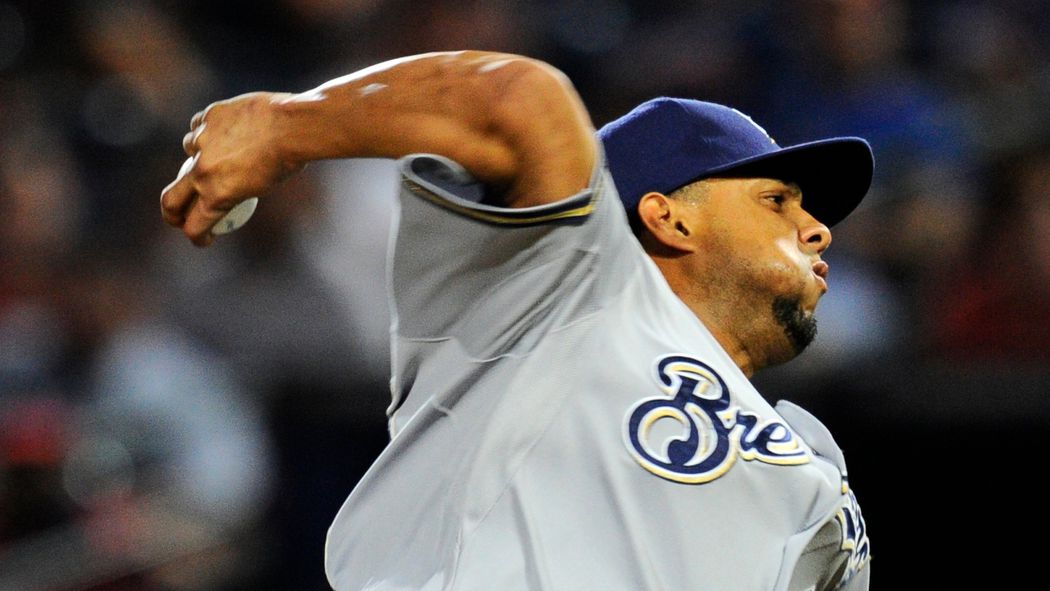 Derek looks at the bright side of a possible Rodriguez signing: The fact that he's still a good pitcher

My reason for wanting the Brewers to stay away from Rodriguez isn't that I think he'll cause a PR problem for the team, though he probably would. My issue is that I can not bring myself to cheer for a person to make millions of dollars from my favorite team when I know that person is a horrible, horrible person. Assaulting defenseless people is a cowardly act from a shitty person.

My guess is that there will be some people who think my stance is a little hypocritical -- I'm usually among the first to come to the defense of Ryan Braun in terms of giving the guy a second chance. Here's where Braun stands in my book: He took steroids, played really well, got caught, served a punishment that was greater than a first-time suspension should have been and has come back.

Braun, unlike Rodriguez, served a punishment for his faults. More importantly, Braun didn't do something to directly bring harm to a defenseless person. There are a lot of baseball fans who say Braun threw Dino Laurenzi -- who collected his urine sample -- under the bus during his press conference after his original suspension was overturned. What Braun actually has said was that the process was done incorrectly, something an independent arbitrator clearly agreed with. Braun lied about using steroids, he didn't lie that the process was done wrong and could have screwed up the results.

I can cheer for Braun, though perhaps not as much as I used to. I can root for him to do good things on the field, because he didn't directly cause harm to another undeserving person. Since being caught and being punished, we've heard nothing wrong about Braun. Rodriguez has, on multiple occasions, caused physical harm to defenseless people.

Rodriguez didn't cheat in baseball, but in my opinion he did something far worse in directly harming the well-being of other people. Multiple times. I won't get behind him, and I'd rather have Rob Wooten or whoever take a role in the bullpen even if it means some drop-off in talent.

Some can root for someone on the field while forgetting what that person does off the field, but I can't. There are assholes all over sports. Rodriguez is a special kind, though, and I hope the Brewers refuse to bring him back to Milwaukee. If they do, I'm not cheering for him.