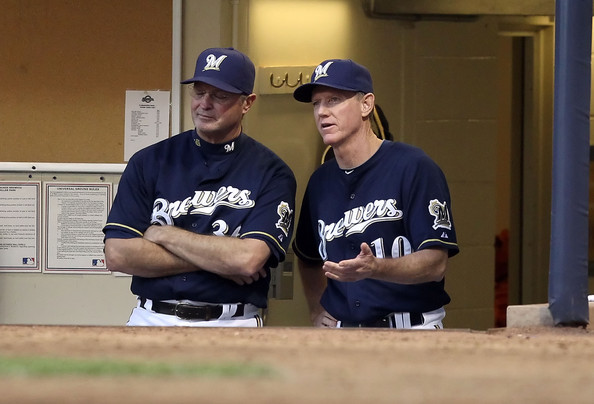 Jerry Narron During the Roenicke Days.

Jerry Narron was let go as the Brewers Bench Coach after he had started the position in the 2011 season. Many feel like he should have been let go the same time as Roenicke. There are even those who feel like Jerry should have not lived another day after his brother Johnny was dismissed as hitting coach. Instead, Jerry held on through everything and was the bench coach under Counsell’s managerial time, even though Craig actually was a player when Narron was coaching in 2011. Jerry Narron has been coaching for a number of years, most notably as a manager for the Rangers and the Reds at the major league level, compiling a record of 665-705 with both teams as their field manager. Before that he appeared in the majors as a catcher for a grand total of 392 games, which eclipses what Uecker and Schroeder did, but still isn’t anything to write home about.

Narron was a guy who I observed "going through the motions." I wish everyone could see the mannerisms he demonstrated and the overall temperament he had. To me, he just seemed like he didn’t have a pulse, and he was only going through this job until he got his next one. I truly can’t describe it. Jerry was lackadaisical, yet even that word did not seem to do it justice for me. Some Brewer fans may recall his ability to write in fantastic calligraphy. For that, he seemed to show a genuine amount of effort, and he put some thought into it. Who knows, maybe Jerry ends up as a base coach somewhere with a team, but truthfully I thought many others could have done the position just as well or better than he did! What is interesting is that Jerry survived on the Brewer Coaching Staff one year longer than his brother Johnny Narron, the hitting coach. My guess is that Pat Murphy is going to be the next Brewers Bench Coach under Counsell. Counsell has known Murphy since college and Murphy was recently told he would not be kept as the Padres manager. I would really be shocked if this "Brewers Marriage" did not happen for him. 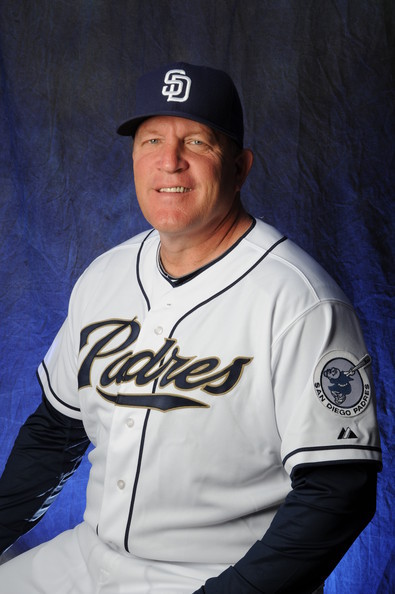 Pat Murphy, a friend of Counsell.

And finally we get to Mike Guerrero. Mike played infield in the minors from 1987-1995. Almost all of those seasons were for the Brewers. He later went on to a Dominican Summer League Coaching job for the Crew from 1996 to 2002. I have no idea what he did in 2003, but he did surface as a Brewers minors manager who moved up through the ranks from 2004-2013. Finally he was named to the Brewers staff as an extra coach for 2014. In 2015 he was moved to first base coach. Surprisingly, he was let go as first base coach after the 2015 season. This is now two years in a row that a first base coach has been gone after the season, and truthfully many did not even understand why Garth Iorg deserved the fall the season before. 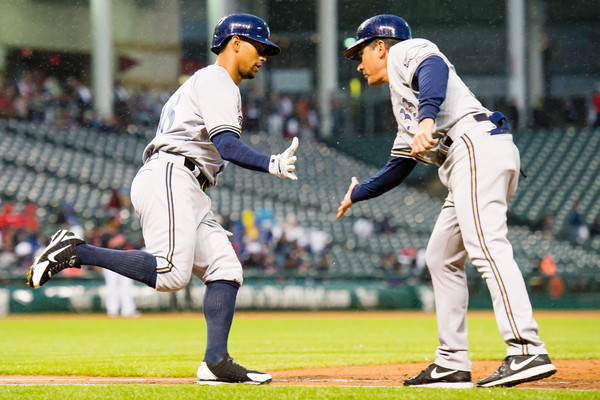 As for me, I do not get why a first base coach makes that much difference. I really feel like the 3rd base coach is more of an influence, since he decides when runners go home. Honestly, the Brewers have fired their first base coaches two years in a row. Really? There are DEFINITELY bigger problems within the organization! Mike did not do anything wrong for sure. I mean did he not tell runners to get back to first on a pickoff too many times? It’s amazing that Counsell didn’t keep him on in some capacity. Mike had been with the Crew for a long time, as he served as hitting coach for the Huntsville Stars, the Double-A affiliate of the Milwaukee Brewers from 2003 to 2008, and from 2009 to 2011 he was the Triple-A Nashville sounds Hitting Coach. He spent 2012 and 2013 as the Milwaukee Brewers minor league hitting coordinator. Mike was added to the Brewers major league staff in 2014 as an extra coach. In 2015 he took over as 1st Base Coach. If anything, Mike Guerrero could have been kept on as an Assistant Hitting Coach under Coles due to his past experience.

In a twist of irony, Sandy Guerrero remains as the AA Batting Coach for the Crew, even though his brother lost his job, much like how Johnny Narron lost his job and Jerry continued on with the Brewers coaching staff. If you were to ask me who might be a Brewers first base coach to fill the opening, it might be Matt Erickson, a former Brewer minor leaguer. Erickson did make it up to the bigs for a cup of coffee in 2004. On December 3, 2008, Erickson was named the hitting coach for the Low-A Wisconsin Timber Rattlers in the Milwaukee Brewers organization. In January 2011, he was selected to manage the Timber Rattlers. Of course, he has been involved with the Timber Rattlers for a number of years and he just really seems like a guy who would be considered for promotion, even though he sure failed as a baseball player. But hey, when has that stopped the crew?

Ultimately, even though a new GM and Assistant GM are in place, Counsell may be allowed to bring in some of his own guys, and I think with 5 staff changes, at least two will be Counsell calls. It will be fun to see what happens! Remember the Arizona Diamondbacks coaching staff of a few years ago? Don Baylor, Kirk Gibson, etc…. the whole staff was littered with major league successful players. Of course the Brewers may not do that. It seems as if we need to promote guys who have never managed or coached before. Yeah. That’s the small market...