Breaking down the Francisco Rodriguez Trade

Yesterday's deal has more far-reaching effects for the Brewers beyond simply who will be next year's closer.

Share All sharing options for: Breaking down the Francisco Rodriguez Trade

Yesterday, the Milwaukee Brewers traded closer Francisco Rodriguez to the Detroit Tigers in exchange for infielder Javier Betancourt and a player to be named later. K-Rod had pitched parts of each of the last five seasons in Milwaukee dating back to 2011, despite never having appeared in the Brewers team media guide in any of those seasons.

The deal was the first trade under new GM David Stearns, who said in a conference call yesterday that the club was "open to discussing any number of players" this winter and that he was trading from a "position of strength" in the bullpen. It was the seventh trade from the major league roster since 2015 began, continuing the rebuilding effort that began under Doug Melvin. The trade comes on the same day that it was reported that the Tigers were uncomfortable with the asking prices of relievers Andrew Miller and Aroldis Chapman. Certainly, Rodriguez cost much less than either of those two players would in trade.

Can not thank K-Rod enough for all he taught me the last two years! It was a pleasure and an honor to watch you do what you did! #nasty

The soon-to-be 34 year old has re-established himself as elite closer and a true veteran leader with the Brewers during the last two seasons, despite the fact that he now averages less than 90 MPH with his fastball. After struggling in a second half stint with the Orioles in 2013, Rodriguez posted a 2.89 ERA and 81 saves over the past two seasons. His 3.81 FIP over that time was skewed by a career high home runs allowed mark (14) in 2014, but Rodriguez was able to cut that number by more than half this season while posting one of the best ground ball rates of his career (46.4%).

Now that he can no longer blow hitters away, Rodriguez has become a control artist on the mound who walked just 6% of hitters over the past two seasons. Relying heavily on his devastating changeup, K-Rod has still been able to live up to his nickname by striking out 27.7% of hitters since 2014 with a 12.6% swinging strike rate. A closer of Rodriguez's reputation and salary is a luxury that a rebuilding ball club doesn't necessarily need, however, so it would be a misnomer to call the trade "unexpected."

Rodriguez's departure means that a hole has opened up in the back end of the Brewers' bullpen. Stearns said that "we are very comfortable with the depth of our bullpen" though he added that any talks about who will move into the closer role at this point are premature. Of course, speculating is what we do best and there are several viable and hard throwing candidates.

Lefty Will Smith is someone who immediately stands out as one of the club's dominant late inning relievers since arriving in Milwaukee, and he posted a 2.70 ERA/2.47 FIP in 63.1 innings last season with an insane 34.5% strikeout rate. Jeremy Jeffress throws similarly hard from the right side, though he relies less on gaudy strikeout numbers than he does inducing ground balls with his heavy sinking fastball.

Less experienced candidates could include Michael Blazek and Corey Knebel, who both performed quite well during their rookie seasons in Milwaukee in 2015. Manager Craig Counsell has previously shown an "analytical" way of thinking down in the dugout with his batting lineup, and perhaps another possibility is that Counsell doesn't employ a firm closer but instead chooses his reliever based on the situation at hand and uses his best relievers in the toughest situations regardless of inning. We'll see about that one, though.

As a part of the trade, the Tigers have agreed to take on all of the remaining salary that is owed to K-Rod. After signing a two-year deal with Milwaukee prior to last season, Rodriguez was paid just $3.5 mil last season and is still owed a guaranteed $9.5 mil. That will be paid out in the form a $7.5 mil salary for 2016 (of which $2 mil is deferred until 2018) plus a $6 mil option for 2017 that includes a $2 mil buyout. With the buyout making 2017 just a $4 mil decision for Detroit, there's probably a significant likelihood that the Tigers exercise the option if Rodriguez can continue to be an above average performer in the bullpen.

Stearns downplayed the importance of the monetary aspect of the trade when asked, saying that "we don't have constraints in that capacity." It is worth noting, at least, that the club is now projected to have a payroll under $65 mil for 2016 after opening over $100 mil last season.

The Brewers have shown a willingness to include money in deals in order to facilitate a better return, so the fact that they didn't in this case signals to me that this was probably discussed but wouldn't have significantly impacted the deal. At first glance, the return for Rodriguez appears kind of light. When hearing Stearns continually repeat his mantra about "acquiring and developing the best young talent...regardless of position" it leads me to believe that Stearns had done his due diligence and that there probably was not a better deal to be had from other clubs. 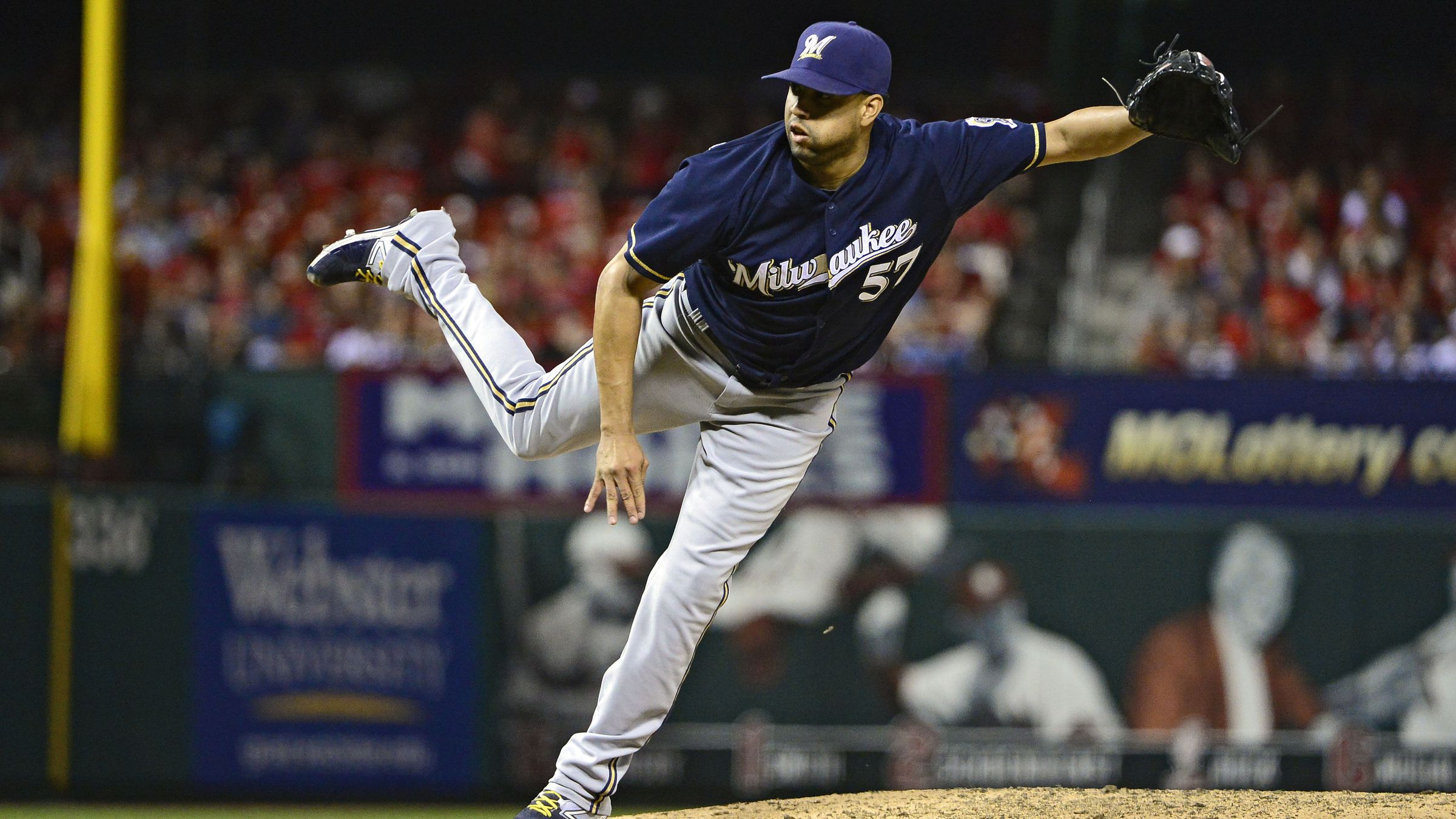 The Brewers and David Stearns have made their first trade of the offseason.

Javier Betancourt is a 20 year old infielder that signed with the Tigers out of Venezuela in 2011. He's appeared at second base, third base, and shortstop during his minor league career, though most of his appearances have come at the keystone and that's where he profiles best going forward. Betancourt is a career .281/.323/.364 hitter in 338 games the minors, including a .264/.304/.336 slash with 25 extra base hits in 531 plate appearances with high-A Lakeland this past season. He has a solid hit tool but offers little in the way of power and doesn't walk enough to offer a high on-base percentage, and he's also got below-average speed on the base paths.

Betancourt does have the ability to become an above-average defender at second, though, which is something that will be important to the Brewers ground-ball heavy pitching staff and prospect pool. Combine his ability in the field with his excellent contact ability at the plate (he's struck out just 11% of the time during his career) and you have yourself a high-floor, low-ceiling prospect that's a nice depth piece for the system. He was ranked as the Tigers' 11th best prospect per MLB Pipeline and now slots in at #20 in the (much stronger) Brewers system. Betancourt does not need to be added to the 40 man roster until after next season. He will probably start 2016 in AA Biloxi and could factor into the second base situation at the big league level as soon as sometime in 2017 with the chance for a September call-up next year.

The Brewers will also get a player to be named later in the deal, though Stearns admitted that situation is a little complicated. He didn't delve very deep into the subject, though he noted that while technically the Brewers could also end up sending a player to be named to Detroit, that possibility is pretty slim. Clubs can now trade recently drafted players shortly after the World Series ends, as well, meaning that that is not the holdup for the PTBNL.

Stearns said the deal will be completed this winter, so it's possible the wait has something to do with the upcoming Rule 5 draft. Reserved minor leaguers are not allowed to be traded between November 20th (the deadline to protect players on the 40 man roster) and the Rule 5 draft in December, which helps prevent younger players from being dealt to a team then subsequently selected by another team in the Rule 5. In all likelihood, the Tigers have probably already given the Brewers a list of lottery-ticket type players to select from and the Brewers will choose from who is left following the Rule 5 draft on December 10th.

Speaking of the Rule 5 draft, the Brewers' 40 man roster now stands at 34 players following K-Rod's removal. This gives plenty of flexibility in deciding what to do before tomorrow's deadline to protect Rule 5 eligible prospects, which Derek discussed here. Milwaukee can now protect six players, though one would think that Stearns might want to leave a spot open to possibly select a player from another club in the draft.

The Brewers have the fifth overall selection thanks to their 68-94 record this past season. One player the club has already expressed interest in (if he isn't protected) is right hander Seth Lugo, who currently pitches in the Mets' system. Doug Melvin tried to include Lugo in the Carlos Gomez trade that eventually fell through while he was still GM and since Melvin is now the team's President of Baseball Operations it's plausible that the club could still have interest. Lugo is 25 and posted a 3.84 ERA/3.45 FIP in 136.0 innings between AA and AAA in 2015.

When considering the return on the Rodriguez trade, it's worth bearing in mind that Rodriguez comes with a poor off-field reputation. His multiple past domestic violence issues are all the more relevant in the climate of today's MLB following the policies instituted by commissioner Rob Manfred and the owners last season. The new rules basically give the commissioner the ability to suspend a player as he sees fit for any future domestic violence issues, even if there is no conviction. Rockies shortstop Jose Reyes will serve as the first test case under the new policy, as he was arrested for allegedly beating up his wife in a Hawaii hotel room on Halloween. Reyes' punishment will serve as a barometer for what K-Rod could face if he has another incident, though the commissioner could conceivably be willing to hand Rodriguez a more hefty penalty given his violent past.

Overall, the trade appears to be a fair one for both sides. The Tigers got themselves a "proven closer" who can be controlled on a reasonable contract for the next two seasons, albeit an aging one who comes with a lot of off-field baggage. The Brewers shed themselves of that baggage and $9.5 mil of future commitments while bringing in at least one viable (though perhaps unexciting) position prospect and another player that we'll find out more about sooner rather than later. GM David Stearns has consistently stated that his goal is to fortify the system with young talent to build a sustainable pipeline to success, and he has been given "complete autonomy" from owner Mark Attanasio to rebuild the Brewers according to his vision. This trade could be just the opening of the flood gates for a potentially very active offseason.