Braun had been playing for a couple years with a nerve damaged thumb, but had an initial cryotherapy session as soon as the 2014 campaign concluded to help fix the issue.

At first, it seemed like the Brewers had called outfielder Shane Peterson up to balance the roster a bit with no true fourth outfielders on the bench. Instead, Peterson will be needed to start for a few days as Ryan Braun has left the team to have another cryotherapy procedure on his thumb, reports Todd Rosiak.

Braun isn't expected to miss much time, as manager Craig Counsell says this is more 'maintenance' on the thumb than anything. According to Counsell, as per Rosiak (1, 2), Braun's return "could be Friday, it could be Saturday but I'm thinking for sure Sunday he'll be ready to go" and "(Braun's) not even ruling out Friday, quite honestly, the way he's talking."

Waiting to declare Ryan Braun back to his old form 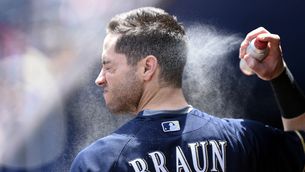 Braun has been looking very good at the plate lately. But he looked good at the start of 2014, too.

Counsell also said that the benefits from the initial procedure had been wearing off some:

"He feels like this therapy that he gets, it significantly helps and gets him back to 100 percent...And if we can keep him at close to 100 percent then we get the great Ryan Braun for 150 games. It apparently has a shelf life, I guess you could say, and we're kind of getting up on that shelf life....It's not a situation where he can't play. We've obviously seen that...But I think he just felt a little deterioration in it and the effectiveness of the therapy had kind of expired. So it's more, get him at 100 percent and not just get through it for the rest of the season-type thing."

As such, it seems the Brewers won't put Braun on the disabled list unless something were to go horribly, drastically wrong with the procedure. Braun first had cryotherapy back on October 2 and was cleared to swing a bat again less than a week later. After the initial session, assistant general manager Gord Ash had made mention of two more possible injections needed in the off-season, but those apparently turned out to be unnecessary and thus did not take place.

Braun had been suffering through a fair amount of pain in his right thumb for since the beginning of 2013 after suffering nerve damage in the area. That had caused a severe loss of production as the 2011 NL MVP couldn't swing a bat properly. Braun once said he was essentially swinging one-handed for a time because of the injury. He originally hoped rest would be the cure with an extended off-season prior to 2014, but his numbers dropped as the year went on and the pain recurred. The cryotherapy procedure was meant to basically freeze the nerve and prevent him from feeling any pain.

As he has shaken off some rust and bad habits picked up from changing his swing because of the thumb, Braun had been beginning to look much better in 2015. He had a tough April, but hit .272/.369/.563 with eight homers in May. It's not quite the line he once had, but it's a sight closer than he had been for most of 2013 and 2014. That said, Braun also looked good at the start of last season and plummeted late. Hopefully a second cryotherapy procedure will help prevent that kind of drop-off from happening again.

In the meantime, it looks like the Brewers will run with an outfield of Shane Peterson-Carlos Gomez-Gerardo Parra. Jason Rogers is likely the fourth outfielder in case the team needs someone else to handle a few innings.

@d_j_harvey Maintenance. Its not the same thing that was done previously.