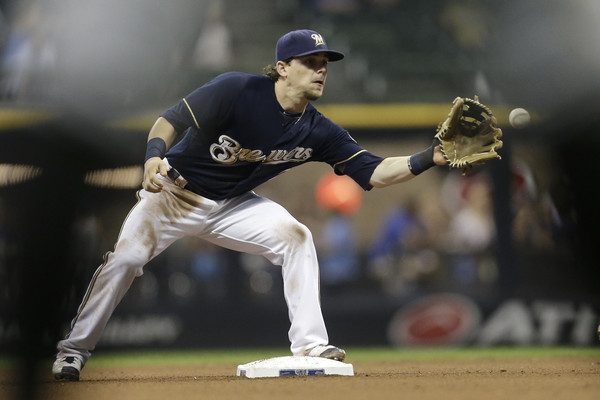 As a longtime Brewer fan, I definitely follow most of the games. I will admit there are times that I miss the game when I am out of town or I have something else going on, but I do know I am one of the most actively involved fans you could meet because I pay attention to team news, notes and updates.

Over the course of this particular Milwaukee Brewers season, the terms "Rebuilding and Retooling" have been thrown around multiple times. Obviously when a team says they are "rebuilding" one can expect personnel changes to be made. The Brewers were no exception, as they dealt players away from the team such as Third Baseman Aramis Ramirez and outfielders Carlos Gomez and Gerardo Parra. In addition, Starting Pitcher Mike Fiers and Relief Pitchers Jonathan Broxton and Neal Cotts were also dealt for prospects.

Once the dust settled and the active major league roster with new arrivals began to become clear, the Milwaukee Brewers began to think about guys they wanted to get a look at over August and September. Obviously looking at guys during the last two months of this season is an aide while the team looks at their future during the "rebuilding process."

How do you think Scooter Gennett feels about this recent swarm of Milwaukee Brewers personnel changes? Beginning with the August 1st Major League Game through the game on September 13th, he has seen 207 innings played at second base. In those 34 games, he has had 105 at bats.

In that same span, Elian Herrera has had 137 at bats. Elian has played 132 innings at 2nd base.

Meanwhile, Luis Sardinas has come on the scene with 9 at bats and 15 innings at second base through that same span.

Hernan Perez has not played second base recently in a game, but he is capable of doing so and has done it in the past in the major leagues.

Right now, Herrera, Sardinas and Perez appear to be the main guys who are a threat to take Second Base playing time away from Scooter. Scooter bats left handed. Perez bats right handed, while Sardinas and Herrera are switch hitters. Other prospects are waiting in the wings, such as Orlando Arcia and Yadiel Rivera. Both of these prospects are right handed batters who are capable of playing 2nd base even though they are shortstops by trade. In addition, Jean Segura hasn’t appeared at 2nd base at the major league level, but has logged over 200 minor league appearances at 2nd.

It definitely seems as though the current management team does not feel comfortable using Scooter as the 2nd baseman against left handed pitchers. There was even a recent game where Scooter was announced as a pinch hitter, but once a lefty pitcher came in, Scooter was pulled aside for right handed batting Hernan Perez. These types of "chess match" moves do happen a lot in the majors, but keep in mind Scooter has a career major league batting average of .298 in 964 at bats. Based on sample size, a typical fan would probably be wondering what the likelihood was that Perez was going to get a hit in that situation. Truthfully though, given the fact that other left handed batters such as Lind and even Shane Peterson or Gerardo Parra have had starts against lefty pitchers in the past, you have to wonder if Scooter’s days in a Brewer uniform are numbered.

General Managers might say this to the Brewers: So you need a possible third baseman? Maybe a relief pitcher? Maybe one more utility guy? The Brewers to other General Managers: So you want us to give you someone who has years of team control? Are you receptive to working out a package deal? Enter Scooter into the offseason trade talks as I feel this team decides that he is not part of the future, given the fact that there a number of middle infielders in the system, as well as the fact that Scooter only plays one position. Well I guess Scooter did play one inning in the bigs at right field, but of course he has logged over 2100 innings at Second Base in the majors. At this point, his relatively young age and years of team control might make him an attractive trade chip to someone out there among the other 29 clubs. Basically, with several options at their disposal and a new management team coming aboard, it does seem to me that Scooter may not be a part of this team’s future.