A new metric from Dr. Mike Sonne attempts to quantify exactly how good a pitchers' "stuff" is. How do the Brewers' rank?

Share All sharing options for: Milwaukee Brewers Pitchers Have Some of the Best "Stuff" in the MLB

In baseball, the term "stuff" has long been used by scouts to describe the quality of the offerings that a pitcher possesses in his arsenal. A pitcher with "great" stuff typically throws a hard fastball and sharp breaking pitches, while a pitcher lacking the proverbial great "stuff" tends to be your run-of-the-mill back end starter or middle reliever that relies less on velocity than they do on command in order to be successful.

As often as the phrase has been used, though, it's always been sort of a nebulous term. Sure, it's easy enough to recognize which pitchers have good stuff. But how does one quantify what qualities go into determining what pitchers specifically have the best stuff?

Dr. Mike Sonne has a PhD in biomechanics from McMaster University in Ontario, Canada and has been working diligently to apply his knowledge in the field of baseball research. His latest work has come in regards to how to quantify what "stuff" is exactly and how to determine which pitchers are working with the best offerings in baseball.

Here is a primer from Dr. Sonne's personal website about what stuff is and what goes into calculating it:

Stuff is an interaction between velocity, pitch usage, pitch movement, and change of velocity. Previous articles on the development of the stuff equation have found that it is significantly correlated with both K/9, WAR, and xFIP/ERA. The benefit of using the stuff metric is, you could theoretically look at a pitcher's arsenal in a bullpen session, and with the use of radar guns and spin trackers, could calculate their stuff. This has implications for both scouting and rehabilitation.

How is stuff calculated? 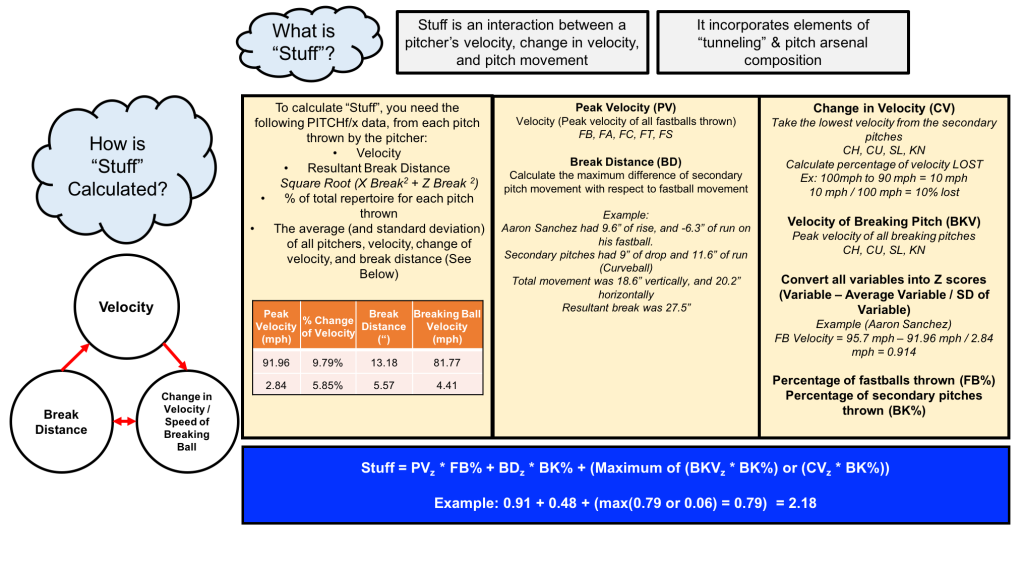 How to Interpret Stuff

Rankings are filtered in descending order, from the best stuff in the MLB to the worst. The raw values used in the calculations are presented (because these are more fun to look at than the z-scores). Also provided is the percentile for stuff - which is from 0% to 100%. If a pitcher has 95% stuff, that means that their stuff is better than 95% of all other major league pitchers. Percentiles are blocked in 1% increments, so that is why you may see more than 1 - 100% stuff pitchers.

With all that out of the way, here are the rankings for the Milwaukee Brewers' starting rotation:

(Note: Pitchers have to have made as many starts as weeks in the season in order to be measured. Rankings based on 144 MLB starting pitchers measured.)

Immediately the first thing that should jump out is just how nasty Jimmy Nelson's stuff is. He's been far-and-away the club's best starter, and that no doubt has something to do with the fact that he combines hard velocity with above-average break on his curveball. In fact according to Sonne, only 11 other starting pitchers in the league have better stuff than Nelson, and that doesn't include pitchers like Jose Fernandez (15), Gerrit Cole (17), and others.

Of course having great stuff certainly helps lead to success, but it doesn't tell the whole story. This is evident in the cases of Chase Anderson and Wily Peralta, both of whom have stuff that is considered "above-average" but both have had up-and-down seasons to this point. Taylor Jungmann, on the other hand, has dealt with a significant loss of velocity in the season's early going and his below-average stuff combined with poor command have caused his plenty of issues early on this year.

Sonne also ranks the stuff of each starting staff across the league and overall the Brewers fare quite well. Milwaukee's starting pitchers combine to have the seventh-best stuff of any rotation in the big leagues so far this season, and only the Mets, Phillies, and Marlins boast a more highly-rated collection of starters in the National League.

Now, for the bullpen:

(Note: Pitchers have to have made as many appearances as weeks in the season in order to be measured. Rankings based on 193 MLB relief pitchers measured.)

Even with the absences of the talented Will Smith and Corey Knebel, the back end of the Brewers' bullpen still possesses three elite talents whose stuff ranks within the top 20 of all relievers. According to Sonne's rankings Michael Blazek has the third-best stuff of any reliever in the big leagues, combining high-octane velocity with a big breaking curveball and slider that he mixes up effectively. The re-invigorated Tyler Thornburg similarly features a three-pitch mix with a hard fastball, though he mixes in a curveball and changeup. Closer Jeremy Jeffress combines his hard sinking fastball with a big breaking curve.

Beyond those three, both Blaine Boyer and Sam Freeman are considered to have above average stuff, though in Freeman's case that is negated by his poor control. Tyler Cravy's stuff isn't anything special and neither is his eventual ceiling. The veteran Chris Capuano, now 37 years of age, has some of the worst stuff of any pitcher that is still kicking around the big leagues.

Given the nasty stuff possessed by the Brewers' setup and closing crew, it should come as little surprise that according to the rankings the bullpen as a whole is ranked sixth overall among all 30 teams in The Show. In the National League, only the division-rival Cubs feature a bullpen with a better collection of stuff than the Brewers.