Back in 2011, Ed Sedar, the man with the best profile in baseball, moved from the Brewers' first base coaching box across the diamond to the third base box. That same year, Runnin' Ron Roenicke took over as the team's manager. Ron's gone now, but Ed's still manning third base, and since he got there, Brewers fans have been privy to an at-times mind-boggling display of baserunning aggressiveness. 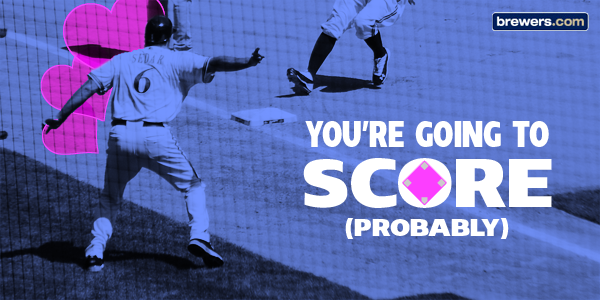 We joke about this of course, but it's hard to put baserunning success or failure into a systematic context since the individual events that we remember are relatively rare. They're also either really exciting, if the runner is safe, or really frustrating, if the runner is out. That frustration is memorable -- it's easy to recall the time Sedar sent Logan Schafer on a shallow fly ball, then stopped him literally 20 feet from the plate, but not as easy to recall runners who tagged up and got in under a tag. Thankfully, Baseball Reference tracks outs on the bases, and specifically outs at each base, separate from force outs and failed stolen base attempts. This number isn't an exact count of occasions in which runners are thrown out on the basepaths like a nincompoop, partly because you might qualitatively put some stolen base attempts in there, but it's close enough. That raw number isn't enough to judge baserunning on, though, because teams that put more runners on will be naturally inclined to have more total runners make outs on the bases. And of course, teams that are more aggressive will run into more outs, but they should also run into more extra bases and runs, so a systematic analysis needs to take that into account as well. And lastly, if we want to look at Sedar specifically, we need to focus on plays at third base and home, since that's where his influence will be felt. 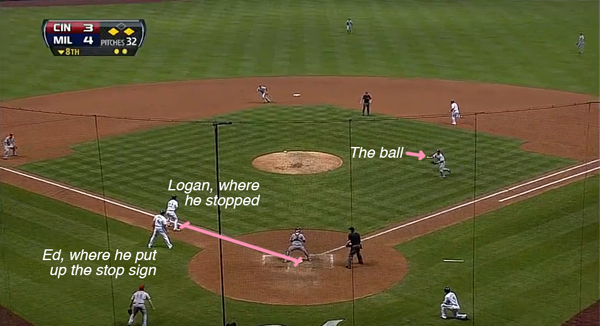 So what follows is a look at team averages since 2011 (through May 26, 2016) across four events -- TOOTBLANs in general, TOOTBLANs at third and home specifically, and extra bases taken. Let's start with all the TOOTBLANs. The percentage here is calculated as follows, based on BRef's columns:

What this should give us is all the outs on the bases that aren't forced or caught stealing, as a percentage of all the available runners that weren't gotten out some other way. For the base-specific numbers, the numerator is OOB2, OOB3, or OOBH. After nearly a third of this season it's still a volatile measure; for example, the Brewers' numbers are clearly being affected by Jonathan Villar in a way that should wash out over a longer period of time. Villar's followed the ghost over to third and been thrown out quite a few times already, and Milwaukee's 2016 third base percentage is much worse than their overall number. 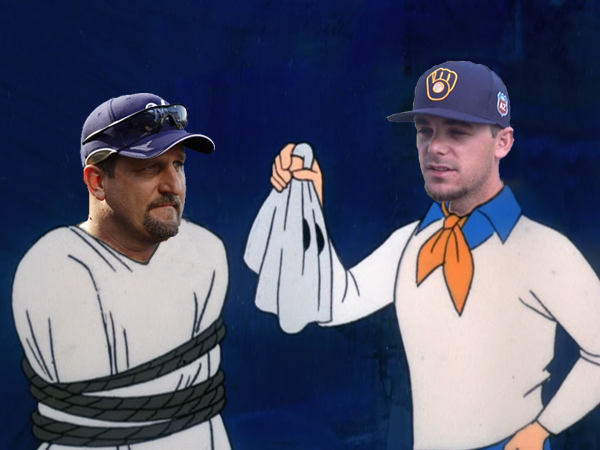 Prepare to have your bias confirmed: Since 2011, the Brewers have the worst TOOTBLAN percentage in the majors. They just beat out Runnin' Ron's former and current team, the Angels, and are almost 18% above the major league average. The best team on this score is the Giants, who won two championships during this timespan. But not only are the Brewers the worst TOOTBLANers overall, they're second-worst on TOOTBLANs at third (to the Angels), and worst on TOOTBLANs at home.

Maybe you're thinking, well, this could just be Ed executing a gameplan based on aggressive running. And it could be! But the only place where the Brewers aren't the worst or second-worst TOOTBLANing team in baseball is at second base, where they're only ninth-worst, and, at 0.92%, not that far off the major league average of 0.86%. It certainly appears that the windmill is what we thought it was.

But wait! Yes, that's a lot of outs on the bases, but perhaps they're accompanied by a big boost in extra bases taken -- going first to third on a single, or scoring from first on a double. Would that it were true, but it appears that this statistic is driven to a great extent by randomness, and that teams tend to regress strongly to the mean over time. The major league average is 40%, and 25 teams are within two points above or below that; the Brewers are right at the average. BRef doesn't break this percentage down, so it's impossible to say how taking third or home differ, but the relative lack of variance among teams compared with TOOTBLAN percentage leads me to think nobody's systematic choices are having that much effect on it.

In sum, the numbers are not smiling upon Ed Sedar's well-practiced windmill arm. If we look only at 2015-16, things are improving. The Brewers were seventh-worst overall last year, and are 11th-worst so far this year. TOOTBLANing and stolen base success are negatively related, suggesting that past analyses of Brewer baserunning can be helpful in picking out the pattern we've seen in the last few years. If so, Counsell's less aggressive philosophy should improve the numbers, even if Sedar's windmilling and Villar's ghost-following tendencies don't.