There's something in the water that's making people a little crazy. Folks, this team is not as good as the record indicates, and as the second half grind gets underway we will probably see that difference between first-and-us grow much larger. There isn't any series of trades or deadline acquisitions that will fix it. We're going to lose. Let it be.

Please consider that the team's 'surprisingly less-than-totally-sucky' start is bolstered by wins over really crappy teams: 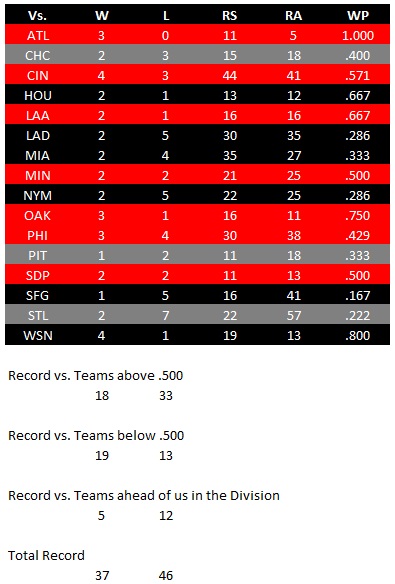 And not only is the barrier finding a way to win against good teams, but also our own division opponents. The Cardinals and Pirates aren't even going to make the playoffs at this rate and we can't beat them - what makes anyone think there's a ghost of a chance for this team who is actively in a rebuild mode will have even the slightest chance of making the playoffs?

I understand that younger fans have less patience and a season seems like a long time, but it's going to be multiple seasons before the Brewers contend. We all have a good memory of the 2011 season and that great playoff run where we were finally in position to make a few trades to hit the postseason. What made that possible was the emergence of young talent.

The core of that surge was the acquisition and maturity of Braun, Fielder, Weeks, Hart, Gallardo, Grienke, and Axford. While we might have young guys in the system that will perform at the same level or better some day, it doesn't mean that they're going to be any better than replacement players when they first come up. Not everyone is a Ryan Braun when they first arrive in the majors.

By 2011 when the window of opportunity had arrived these guys had experience:

Aside from Axford (who was a very specific piece in a strong bullpen that had solid veterans like K-Rod and LaTroy Hawkins), these guys had several years of MLB experience and established performance. There is a mountain of difference between a roster of kickaround guys and prospects and a team like that. That team was ready, and that's why they traded for Grienke and Marcum and K-Rod.

And sometimes the timing on things just doesn't work out. Fielder left after the season, just as Carlos Gomez and Johnathan Lucroy were starting to rise. It was almost the perfect alignment.

And that's the world the Brewers live in. We have windows of opportunity that we need to maximize because we don't have a $300M payroll like the Dodgers. We need to plan and be smart about our opportunities. If the Brewers win a few more games than expected, great. It's good for kids to get confidence too, and any top-10 draft pick will be good to have. Winning early in the season keeps a few butts in the seats.

You will need to be patient with this team and let them do the things that will help them succeed in the long run, and that means not thinking every occasional win over the Nats or Dodgers suddenly means we're legit. We're not. I think we're doing things the right way, but I don't expect a playoff run for another 4-5 years. This is what it means to be a Brewer fan, because the league supports financial inequity. We just have to deal with that and follow the rise over multiple seasons.

Be patient fans, it will happen eventually. But it will not happen this year, and any trades that don't make us younger and stronger will just make us older and weaker and threaten our next window of opportunity. Think 2020.