Arbitration-eligible (with projected salaries from MLBTR):

Write "tender" or "non-tender" after each of the following names. You can also trade a player before or after tendering a contract.

Explain the toughest calls if necessary:

Vogt was the only non-tender because there will be cheaper options while not really losing anything. Look to bring him back for half of his projected salary maybe, or don't. Doesn't matter.

I'm not convinced that Anthony Swarzak is a good pitcher. Dude isn't suddenly a 10K/9 guy going forward. I'm not paying $7 million per year for Carlos Torres with better control. Two years for $9 million, sure. He won't take that because the Dodgers will offer him $300 million or something.

Same with Neil Walker. MLBTR projects two years, $20 million total. To be honest, I think that's decent. But I think MLBTR is low on that and that someone will pay more, or give a third year. I don't want to do either of those things. Name of the game right now is to keep financial flexibility for coming years.

The Brewers aren't going to win a World Series unless guys like Jimmy Nelson, Chase Anderson, Travis Shaw and Domingo Santana keep up the production they had in 2017. And/or have Lewis Brinson, ItsTimeToWin, Josh Hader, [your favorite prospect] become stars. Not all of them, of course. But a few from those lists, at least. And when those guys become stars, they do need to be paid or lost eventually. Rather than go 3 years for Walker, who's a fine player with a known ceiling, I'll keep some extra flexibility.

Wade Miley: Minor league contract, invite to spring training. Take a shot, see if he has anything for no risk. Maybe he helps fill the fifth spot in the rotation, if he comes out of spring strong.

John Axford: Minor league contract, invite to spring training. Still struck out 9 per 9 last year, but his control was terrible. Bring him back for one more shot at the majors.

Pat Neshek: Two years, $12 million. That's what MLBTR has him getting, and I'll offer that. I like him better than Swarzak, and that would come slightly cheaper. He's older, sure, but for two years I'll take the chance he doesn't flame out. Concerns are that he is a fly ball pitcher and has had home run issues in the past. Screw it, dude throws side arm and I love it.

Yu Darvish: I engage in talks, and see if it's worthwhile. He'll get more than I want to pay at this time. There will be other guys available when the Brewers are ready to make a splash.

#1: Trade Brian Anderson and Wei-Chung Wang to the Angels for Mike Trout

Best case scenario, Trout plays another 15 years. Announcers -- really good announcers -- can stay in the game for decades. BA is one of the best and is going to outgrow Milwaukee soon. He's 46, so the Angels could get another 30 years out of him potentially. Double Mike Trout, basically. I throw in Wang because the dick jokes have worn thin. Anyway, I need Trout so that I can have someone good enough to make the next move

#2: Flip Mike Trout to the Athletics for Khris Davis

#1: Trade Jesus Aguilar to the Royals for Scott Alexander

The Royals are losing Eric Hosmer in free agency, and Brandon Moss isn't very good. Their DH production in 2017 was the worst in the league with a combined .192/.271/.389 line. They don't have any prospects knocking on the door to fill either position.

The Royals look like they're on the way down for the near future. Someone like Jesus Aguilar, who can fill that 1B/DH cheaply for years (not arb-eligible until 2020) is pretty much what the Royals need. And for a team that's not competing, bullpen arms are a luxury.

Scott Alexander can help fill in the hole left by Swarzak. Alexander is a heavy ground-ball pitcher (74% grounder percentage in 2017!), which will play well in Miller Park. He's also cheap, still pre-arb until 2020. Is he a sure-fire first option out of the bullpen? Nah, but he's a good pitcher who should strengthen the Brewers bullpen.

The exact same deal as the Cardinals gave to Carlos Martinez, this buys out all of Nelson's arbitration and two years of free agency. If his 2017 breakout was legit, this is a steal. If he doesn't I'd still bank on him being a useful pitcher and this extension not looking terrible. Martinez had shown better stats before his extension, so I think this offer is reasonable.

Know who I'm not trading? The guy who hit .278/.371/.505 with 30 homers as a 24 year old. I'm looking to figure out how to keep that guy in the lineup over the coming years. This gets him more money in his last pre-arb year and guaranteed money for his future. For the Brewers, it keeps a budding star for two years longer than they have team control. Wil Myers is a worse player and got a better extension, but he was closer to free agency.

Other: I also start looking at extending Orlando Arcia to a cheap contract, 5/$25 million, or something along those lines. The Brewers have tried similar with Jean Segura and Jonathan Villar, I'd hardly be shocked if they do the same with Arcia. I also start looking at an extension with Travis Shaw right away, though that can wait until next year. Might have talks with Chase Anderson, but he's 29 and signed through age 32, so it might be better to wait on that.

Here is the short version of my strategy: Stay the course. None of the moves I make are anything world-shattering, nor is it completely changing the core of an 86-win team from 2017. As explained above, the Brewers are going to make it based on the players in their system paying off and these moves are designed to provide flexibility to keep those players in Milwaukee.

Not that things would keep the Brewers totally stagnant from 2017 to 2018. It's just smaller changes, and tweaks within the organization. Things I would do would be to have Ryan Braun take reps at first base, obviously a thing that has been talked about by fans since like 1829. But that would 1) Provide a backup option to Eric Thames and 2) Give Braun time while also making more time available in the outfield.

That second point means that having four outfielders who all deserve time is a lot easier to handle. When Braun is injured or playing first base, Domingo Santana could move to left field, Brett Phillips can slot into right and Brinson in center. Even with Braun in the outfield, you should be able to get each guy around 120+ games. I'd shop around Keon Broxton, probably for a similar deal to the Aguilar trade. But Broxton would be a great fifth outfielder, and also keeps from needing Villar/Thames/Perez in the outfield ever.

I'm a firm believer that you try a top pitching prospect at starter until he proves he can't handle it. With Nelson missing time at the beginning of 2018, it's the perfect opportunity to let Hader try his hand in the rotation. If it works, you've upped his value by multitudes. If it doesn't, you still have an incredible reliever. (By the way, Jorge Lopez and Kodi Medeiros get moved to the bullpen in the minors, if I'm running the team). Hopefuly Hader crushes it and Suter/Guerra are out of the rotation when Nelson is back instead. Also, Aaron Wilkerson could be switched with either Guerra or Suter. Spring training competition and all that.

The extensions are a key part of my plan. Lock guys up early and hopefully get them cheaper. They may not work out, but give it a shot and make it easier to plan out for the future. If you know you're bigger players are locked up for sometime, you can have a better idea of when it's safest to make a bigger splash while mitigating some risk.

Is it a sexy, make people crazy with excitement plan for 2018? Absolutely not. It shouldn't be. The Brewers won 86 games last year and most of their key players are in their 20s. Take a year, see if they can replicate and build on success. There's still time here, and they still have some hopefully key components just starting their MLB careers. The older guys left on the team, including Ryan Braun, are no longer the main pieces to the Brewers success. Let's see what happens.

Here's the projected budget over the next four years, showing the flexibility that remains: 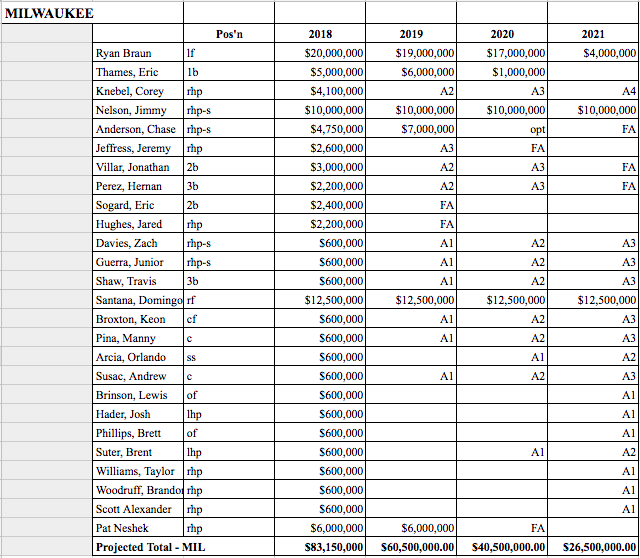