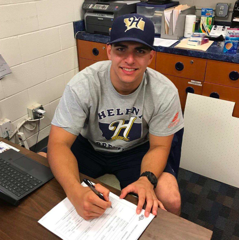 I recently had the chance to interview Milwaukee Brewers 2017 draft pick, Brent Diaz. Diaz has been raking it to start his professional baseball career. This should not come as a surprise for anyone familiar with the native of southern Florida. The catcher was an All-American last year and a finalist for the Johnny Bench Award. Diaz passed on his final year at Louisiana Tech after he was drafted in the 29th round by the Brew Crew. It did not take long to figure out that Diaz is a team first player. He has a great deal of respect for the bonds that form among teammates. He has had a fast start in Helena (Milwaukee’s rookie affiliate), and I can’t wait to catch a game in Missoula against the Ospreys.

TMN: You were just drafted and signed with the Brewers, what is your best memory as a Brewer so far?

BD: Definitely last night's walk off (Helena beat Billings in the 13th inning on 7-6-17), has been my best memory so far. Coming together with a lot of different guys and backgrounds has been neat. So seeing guys be selfless in certain situations to come out with a win was great.

TMN: What do you know about Brewer Legend Robin Yount?

BD: I don't know anything about Robin.

TMN: What is your best baseball memory so far?

BD: Proudest memory are the relationships you make with the guys. We all have our good days and bad days in this game of failure. But the bonds you create with teammates becomes a sense of brotherhood. I refer to it as teammates for life.

TMN: Who is your all-time favorite teammate?

BD: Mike Decegile, he was my backup in College and is my best friend. He never cared about his own personal stats all he cared about was the success of the team and his teammates.

TMN: What is your proudest life accomplishment (teacher question)?

BD: My proudest lifetime moment is probably just being able to give to others. Being in a position that allows me to give is what makes me proud.

TMN: Besides baseball, what sport(s) did you play when you were in high school?

BD: I didn't play any other sport.

TMN: Who is your mentor or biggest teacher in life and why?

BD: Jesus Christ, because his word is truth and powerful. He was a man who lived perfect for 33 years and beat Satan at his own game. No man who has ever walked the earth has ever done that.

TMN: What is your favorite quote?

BD: It is not the critic who counts; not the man who points out how the strong man stumbles, or where the doer of deeds could have done them better. The credit belongs to the man who is actually in the arena, whose face is marred by dust and sweat and blood; who strives valiantly; who errs, who comes short again and again, because there is no effort without error and shortcoming; but who does actually strive to do the deeds; who knows great enthusiasms, the great devotions; who spends himself in a worthy cause; who at the best knows in the end the triumph of high achievement, and who at the worst, if he fails, at least fails while daring greatly, so that his place shall never be with those cold and timid souls who neither know victory nor defeat.

TMN: What is the best nickname(s) that you have been given?

BD: I never really got a nickname

TMN: What is your favorite breakfast cereal?

TMN: Who is your favorite cartoon character(s)?

TMN: Who is your favorite musical group?