He's the 20th-best prospect in baseball, according to MLB.com.

Any concerns about Hiura's glove will be outweighed by his huge upside as a middle-of-the-order bat, as there are few players in the Minors who can rival his combination of hitting ability and power

He's the 17th best prospect in baseball according to Baseball America. Fangraphs has him at 13:

This is an incredible hitter. He has lightning-quick hands that square up premium velocity and possesses a rare blend of power and bat control.

Baseball Prospectus is even more bullish, putting him at 6. Sickels has him at 18.

Pretty much universally Keston Hiura is seen as a top-20 prospect, with the reasoning purely being his advanced bat that should play well in the majors. Well Hiura's defense isn't great, it can be adequate enough -- perhaps especially so in the Brewers' shift-heavy defense. But the bat. It's his hitting that has earned so much acclaim and that might very well have gotten him taken even sooner in the 2017 draft were it not for an elbow injury.

All that naturally leads to dreams of Hiura coming up to the majors and being an immediate contributor. He probably won't be, though. At least not right away.

Top prospects often need to acclimate to the majors, and sometimes that acclimation makes them look really, really bad at first. Look at Lewis Brinson this year, for example. He was ranked right around the same range prior to 2018 that Hiura is now and he stunk. 62 OPS+ stunk, if you didn't remember.

Look at the hitters in the top-10 of the 2013 or 2014 Sickels rankings and their first couple years in the majors (not counting seasons w/ less than 20 games): 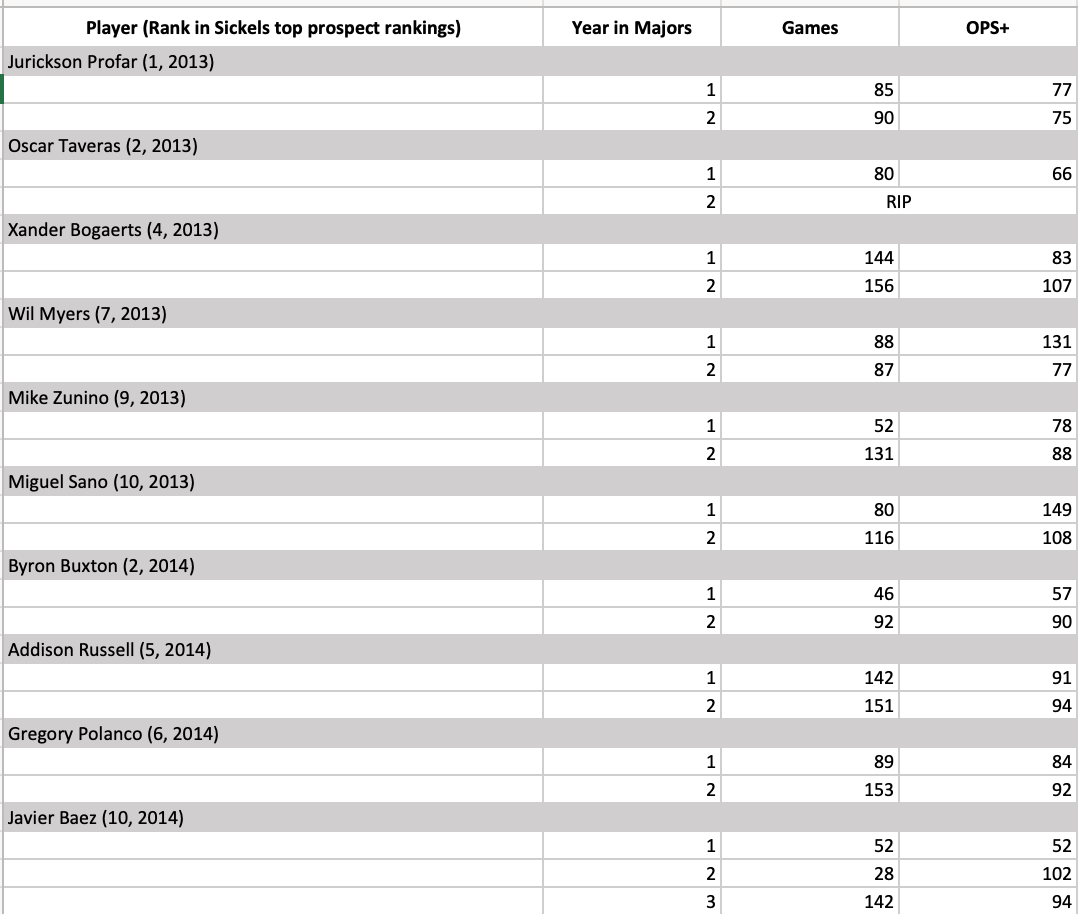 Obviously this is a pretty simplistic way to look at things and doesn't take into account the kind of prospects these players are. Profar was in the majors at 20 years old initially, then wasn't back up for a few years. Buxton has exceptional speed and defense that helped his prospect status.

It also leaves out guys just past the top-10 who DID rake immediately upon making it to the majors, guys like Christian Yelich (ayyy), Francisco Lindor, Kris Bryant, and Carlos Correa.

But even given those players who did hit well immediately upon reaching the majors, you can see that it's not a sure thing for top prospects to hit. It also doesn't mean that they'll be bad players -- a lot of the players on that chart have gone on to be potential all stars. It just means that Major League pitchers are the best of the best and it can take a bit of time before someone new to the majors adjusts.

Hiura himself had some struggles when advancing levels in 2018. He was great in High-A Carolina, hitting to the tune of .320/.382/.520 but then went to Double-A where he hit .272/.339/.416. Not a bad effort, but it's not like he went to Double-A and immediately looked like a star. Thinking he can immediately produce in Triple-A, or in the majors, is still a gambit.

This is my own conjecture, but I think there are three things that make us want to/think Hiura could be the exception to the early-career struggles that prospects often face:

Hiura hitting bad hurts the Brewers chances of making the playoffs when there are a lot of really good teams in the NL right now. And having gone through pre-suddenly-a-star Gennett, the ups and downs of Villar, Sogard, Perez, and multiple trades the past few years to try and find someone at second base, I think we're all frothing at the mouth for the potential of getting someone to reliably man the position for the foreseeable future.

And then Hiura is, in truth, the only really good prospect the Brewers have right now and that places a lot of maybe undue expectations on him right now. Because if he isn't as good as advertised right away, what does that say about the rest of the farm? Can we have much hope for Ray or Erceg or anyone else? Sure we could, but it can plant a seed of doubt to see the one guy who was supposed to be a sure thing struggle at first.

I should emphasize, too, that early-career struggles absolutely wouldn't mean Hiura is a bust and given all the scouting reports on him it sure sounds like he's going to have a good career. But at the same time, relying on Hiura to be The Guy at second base immediately this season, or immediately upon being called up, is perhaps the wrong way to go about things.

Thus why the Moustakas signing is important. Hiura isn't blocked, really. If he's good enough to be The Guy, then he's good enough and will get the time. But if he's not immediately productive, the Brewers know they have a hitter that can be relied upon to go against Major League pitching. If the Brewers think Hiura is ready to be called up and he is as good as advertised right away, now Milwaukee has extra depth. But Moustakas gives insurance against Hiura having some early-career struggles.

Hiura probably will be -- at least -- a solid player in the Major Leagues. But we shouldn't put the expectation on him that he will be one right away. It will be awesome if it does happen, though.